For Michigan State, Halloween weekend has been nothing short of a living nightmare.

On October 31, 2009, the Spartans were upset by Minnesota on the road. A day before Halloween last season, coming into Iowa City undefeated, the Spartans were outplayed by the Hawkeyes from the opening kickoff and suffered an embarassing beating that ultimately cost them a chance at a BCS game.

The trend continued on Saturday in Lincoln. 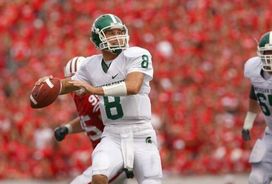 Kirk Cousins and the Spartans were unable to remain unbeaten in Big Ten play.

Michigan State tripped up again on the last weekend of October, this time against Nebraska after going through a stretch in which it defeated Ohio State, Michigan and Wisconsin in consecutive games. Bo Pelini's squad defeated Mark Dantonio's team 24-3, a physically dominant performance by the Cornhuskers in a key Big Ten Legends division game.

Was the euphoria of last week's miraculous last-second finish too much to overcome for Michigan State? Was being tabbed the class of the Big Ten too much pressure to bear? Or did Nebraska just play its best game of the season?

Likely, it was a little bit of all of the above.

On the road, the Spartans did not try to establish any semblance of an inside rushing attack against a Nebraska defense that is susceptible up the middle. That lack of a ground game prevented the Spartans from successfully employing their patented play-action game. Thus, MSU wasn't able to move the ball through the air. It also didn't help that quarterback Kirk Cousins had one of the worst games of his career, often throwing into double coverage. The senior signal-caller didn't get any help from his receivers either, as B.J. Cunningham and Co. struggled to get consistent separation from Alfonzo Dennard and the Nebraska cornerbacks.

Cousins finished 11 of 27 for 86 yards with an interception, a pick that set up the Huskers' first score. The Spartans recorded just 187 total yards against a defense that has struggled to live up to its billing all season.

With the win, Nebraska remains in the thick of the division battle, with Michigan State coming back to the pack. Four teams could be sitting with one loss in the division at the end of the day if Iowa takes care of Minnesota. The race between Michigan State, Nebraska, Michigan and Iowa certainly has added a new dimension to the annual Big Ten race, as all four teams have designs on making it to Indianapolis for the first-ever Big Ten championship game on the first Saturday in December.

The good news for Michigan State is that its remaining schedule is easier than the other three teams competing for the division crown. The Spartans play Minnesota at home, travel to Iowa, host Indiana and finish at Northwestern.