Let's take a look at some of the most important aspects of this matchup between the Bulldogs and the Mustangs. 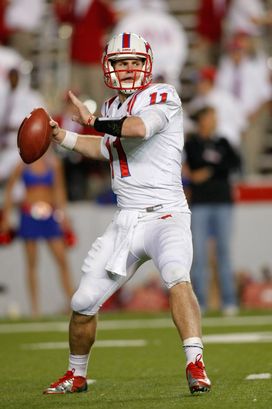 US PRESSWIREGarrett Gilbert hasn't thrown an INT since he tossed two on October 18, but he will face a stout defense Monday night.

• The Bulldogs' QB edge: Both teams have quarterbacks who are well-known nationally for different reasons. Fresno State's Derek Carr, who completed 68.1 percent of his passes for 3,742 yards with 36 touchdowns against just five interceptions this fall, is the younger brother of former Bulldog and current NFL backup David Carr. The younger Carr has had a fantastic season and made Bulldog fans ecstatic when he announced after the regular-season finale that he would return for his senior year. He was the Mountain West offensive player of the year and had six games of at least four touchdown passes this season. He will undoubtedly join his brother at the next level after helping lead the nation's 12th-best passing offense. Meanwhile, SMU's Garrett Gilbert is known most for his struggles as the starting quarterback at Texas in 2010, a season in which he was benched as the Longhorns stumbled through a 5-7 campaign. Gilbert passed for 2,720 yards and threw 14 touchdowns this season, but he continued to struggle with turnovers. He tossed 13 interceptions, including a 5-pick effort in a loss to TCU in late September. The Mustangs have to be encouraged, however, because he hasn't thrown an INT since he tossed two against Houston on October 18. But he will be going up against the nation's fourth-best passing defense in this contest.

• Turnover margin: One key turnover could be the difference in this one, as both teams rank in the top 12 in turnover margin and are tied for third nationally with 33 forced giveaways. Because Fresno State's offense will be tough for SMU to defend, the Mustangs may have to rely on extra possessions. And forcing a key turnover or two could be crucial to keeping this game close. But can Gilbert protect the football? The Bulldogs' defense will be facing a signal-caller who has thrown more career interceptions than touchdowns. But as mentioned above, Gilbert protected the football well in the last quarter of the season, not tossing an interception in his last 166 attempts. But Bulldogs head coach Tim DeRuyter has proved, as he did at previous stops such as Air Force and Texas A&M, that he can turn around a defense. And the Bulldogs are allowing just 22.2 points per game this season, giving up 100 fewer yards per contest compared to last year and rank No. 13 in sacks this fall. Gilbert will certainly have to play the best game of his career.

• Grounding it out: With Gilbert facing a tough Fresno State secondary, expect a lot of touches for Mustangs running back Zach Line, who rushed for over 1,000 yards for the third straight season. Gilbert even proved effective on the ground when he rushed for 111 yards and a touchdown against Tulsa. Line is one of the most productive backs in SMU history, and head coach June Jones can’t be stubborn and let Gilbert toss the ball around against such a ball-hawking secondary that features safety Phillip Thomas, who leads the nation with eight interceptions. Meanwhile, Fresno's attack will be so tough for SMU to contain because the Bulldogs also run the ball effectively with Robbie Rouse, who rushed for 1,468 yards and 12 touchdowns this season. SMU ranks 24th nationally against the run, while Fresno State sits at 73rd. Will Rouse find room to run Monday night?