The 2011-12 bowl season continues Saturday night with the Hawaii Bowl between Nevada and Southern Mississippi.

The Wolf Pack will be looking to upset the Golden Eagles, a team that is going bowling for the 10th straight year, which is the longest active streak in Conference USA. Interestingly, this could be a preview of a future conference game, as Nevada is set to join the Mountain West next year and the MWC and C-USA are set to align in football as early as 2012. 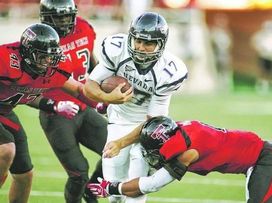 Nevada's Cody Fajardo was named the WAC freshman of the year.

Nevada didn't give fans a memorable 13-1 season as it did in 2010 with quarterback Colin Kaepernick, but the team that knocked Boise State out of the BCS picture last season did manage to reach the postseason once again. The Wolf Pack had a chance to clinch their second straight WAC title late in the season, but they were unable to hold a 17-point lead at home to Louisiana Tech, which ended up claiming the conference crown after the Wolf Pack fell the next week at Utah State as well. Things became even worse when top running back/kick returner Mike Ball, who rushed for 704 yards and three touchdowns, was kicked off the team for violating team rules. The bright spot is that freshman quarterback Cody Fajardo has played exceptionally well operating Chris Ault's pistol offense since taking over for Tyler Lantrip. Fajardo has completed over 70 percent of his passes for nearly 1,700 yards and six touchdowns while rushing for 680 yards and 11 scores, and he leads an offense that averages more than 520 total yards per game, good for fifth in the nation.

Meanwhile, Southern Miss will be playing its last game under head coach Larry Fedora, who will take over the North Carolina program after leading the Golden Eagles to their first 10-win regular season since 1952 as well as a Conference USA championship-clinching win over previously undefeated Houston to knock the Cougars out of a BCS spot.

Quarterback Austin Davis paces the Southern Miss offensive attack, and he holds most of the program's notable passing records, including career passing yards, career touchdown passes and career 200-yard passing games. He set single-season school records for touchdown passes (28) and passing yards (3,331) this fall, and he's also a real threat on the ground as well. As a team, the Golden Eagles average over 200 rushing yards per game and boast several talented weapons on the ground, including Desmond Johnson, Jamal Woodyard and Tracey Lampley. Nevada will find it difficult to stop such a balanced offensive attack.

Defensively, Southern Miss has a knack for the pick-six. The Golden Eagles have returned eight interceptions for touchdowns this fall, which set an NCAA record. It's a credit to first-year coordinator Dan Disch, who was able to get his players to buy into his 4-2-5 scheme.

Keep an eye on: Rishard Matthews. The Nevada receiver will need to have a big day if the Wolf Pack have any designs on hanging with the Golden Eagles. He is the team's difference-maker on offense, leading the team with 91 catches for 1,364 yards and eight touchdowns. Fajardo must be able to get the ball to the 6-2, 215-pound senior enough for him to make an impact.