If you’ve been looking forward to the Sheraton Hawaii Bowl between Hawaii and Tulsa since the bowl matchups were announced, you are not alone. If you’re sipping on spiked egg nog during Christmas Eve festivities and think you’re seeing astronomical numbers on the scoreboard, don’t diagnose yourself as being tipsy. Though you likely could be a little buzzed, depending on how you spend the night before Christmas.

In all seriousness, Hawaii and Tulsa could conceivably combine for 100 points scored. That’s how prolific these offenses have been this season — and how vulnerable their defenses could be on Friday evening.

Let’s take a look at how these two teams stack up.

Coming into the 2010 season, it could have been argued that Hawaii head coach Greg McMackin was entering a make-or-break campaign. After all, June Jones had made Hawaii football must-see TV during his tenure at the school. From 2001-07, the Warriors endured just one losing season and Jones led the team to its first BCS bowl game in school history during the undefeated ’07 season. However, since Jones left the island for Southern Methodist, times have been tough for fans of the Warriors. 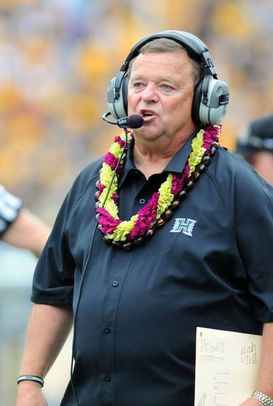 ICONGreg McMackin led Hawaii to a share of the WAC title this season.

Under McMackin, the Hawaii program was seemingly spiraling out of control.

Not only had he posted a losing record in two seasons (13-14), but the off-the-field drama didn’t bode well, either. He made a derogatory remark to describe the Notre Dame chant the previous offseason, and his offensive coordinator Ron Lee abruptly decided to resign in the middle of summer.

The program certainly did not resemble the one that played Georgia in the Sugar Bowl under Jones’ leadership.

But by the end of the regular season, Hawaii found itself in a three-way tie for the WAC title and sitting at 10 wins. Not too shabby of a turnaround in McMackin’s third season.

The Warriors once again possessed an aerial attack that gave defenses fits all season. They rank ninth nationally in scoring at 39.9 points per game with quarterback Bryant Moniz under center. It was Moniz — not Auburn’s Cam Newton — who led the nation in total offense with 362 yards per game. The junior has thrown for 4,629 yards, tossed at least three touchdowns in nine games, and he’ll likely at least come up in the national conversation when discussing preseason Heisman candidates in 2011.

Todd Graham’s Golden Hurricane, meanwhile, can put up gaudy numbers of their own behind quarterback G.J. Kinne. Tulsa ranks tenth nationally in scoring, as Kinne has thrown for 3,307 yards and 28 touchdowns while rushing for a team-high 557 yards and seven touchdowns. The Golden Hurricane won six straight to close the regular season and they would have played for the conference championship if East Carolina had not connected on a Hail Mary with no time left in the season opener.

ICONTulsa QB G.J. Kinne was the Conference USA offensive player of the year.

Kinne’s top target is receiver Damaris Johnson, who is one of the most dangerous athletes in all of college football. Johnson can line up anywhere on the field and do a little bit of everything while doing a whole lot of damage. Johnson has 16 receiving touchdowns, six rushing scores, two punt returns for touchdowns and two kick returns for scores in his career. He led the country in all-purpose yards this season because of his dangerous punt- and kick-return abilities. He was a second-team AP All-American this year and is just 295 yards away from setting the NCAA career record for all-purpose yards — and he’s just a junior.

If there is one thing that sets these teams apart it is a poor secondary. Hawaii gives up its share of yards and points, but Tulsa’s pass defense is ranked 119th nationally.

The Warriors put up 36 points against USC in the opener, 49 points at Fresno State and also beat Nevada this season.

Tulsa has played some nail-biters in the last three games of the season, so the team won’t panic if it’s close in the fourth quarter. However, the pass defense just won’t be able to make enough stops against Moniz and the aerial attack of Hawaii.