First and foremost, this is not a list of head coaches who may be on the hot seat. Rather, this is a rundown of program-builders who are either trying to reclaim consistent success from the past for their schools or further stabilize the squads for the future.

Entering the new season, we don't exactly know which direction their programs are headed, meaning the 2014 campaign is a sort of measuring stick for their teams.

Al Golden, Miami (FL): The former Temple head coach arrived in Coral Gables in December 2010, and in his tenure the Hurricanes have gone 22-15 overall and 13-11 in the ACC. This is a coach who took the Owls bowling, the same Temple squad that was once kicked out of the old Big East. Since his arrival to the Sunshine State, the 45-year-old was able to weather the NCAA storm and bring stability back to the 'Canes program. But fans expect The U. to get back to the dominant days of the 1980s and early ’90s. Entering his fourth season, can Golden at least win the Coastal division and get to an ACC title game? The 'Canes began last year 7-0 before losing stud running back Duke Johnson to a broken ankle, although not even the talented Johnson could offset a defense that was thrashed often, including in a 24-point loss to Louisville in the Russell Athletic Bowl. But it should be a deeper and improved unit this fall, so all eyes will be on whether the team gets good enough play under center. Overall, athletic director Blake James should be happy with the job Golden is doing at UM, but he may have to pay up to keep Golden if the team becomes annual ACC contenders and re-emerges as a national power. Golden is currently signed through January 31, 2020, and he has done a very nice job on the recruiting trail under tough circumstances. 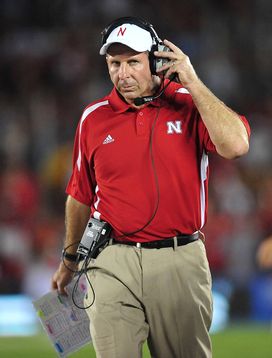 US PRESSWIREIs this the year Bo Pelini leads his team to a conference crown?

Bo Pelini, Nebraska: Assuming he doesn't slip up off-the-field in front of a mic, Pelini is pretty safe in Lincoln after receiving a contract extension through 2018. While some pundits may joke about Pelini not being able to get the Cornhuskers past that four-loss barrier, athletic director Shawn Eichorst said before the Huskers' win over Georgia in the Gator Bowl that Pelini was the man who would "lead our program in the future." Like Miami (FL) fans, however, Husker faithful yearn for a return to superpower status. Pelini has won at least nine games in each of his six seasons, but he did not net a BCS bowl appearance and has not won a conference crown. Now that the program is three years removed from the Big 12, Pelini's squad could be primed for a spot in the Big Ten title game. But while the team has the most talent in the West division, the schedule is difficult.

Mike Riley, Oregon State: The Beavers head coach has never lost less than four games in Corvallis. In 13 total seasons at Oregon State split over two stints, he holds an 88–73 overall record and a 56–56 mark in Pac-12 play. But he has at least six losses in three of the last four seasons, and the Beavers endured a loss to FCS foe Eastern Washington and five straight defeats to end the regular season last year before rebounding with a win over Boise State in the Hawaii Bowl. The Pac-12 is only becoming more difficult, especially with the success of some of its newer head coaches. In a state where the Ducks are the "it" school, what can Riley do to stabilize the program and make the Beavers consistently competitive, especially against upper-echelon conference foes?

Kyle Whittingham, Utah: The Utes are still adjusting to life in the Pac-12 after coming over from the Mountain West, so Whittingham isn't in too much danger of getting axed. And keep in mind the Utes knocked off Rose Bowl-bound Stanford last season. But the league has never been tougher with stalwarts such as the Cardinal and Oregon as well as UCLA, USC and Arizona State, and the Utes are 5-13 in league play the last two seasons. Stabilizing the offense is crucial, so keeping either Travis Wilson or Kendal Thompson healthy and productive is of the utmost importance as Whittingham looks to prove that the Utes really do belong in the Pac-12.

Frank Beamer, Virginia Tech: Like former Texas head coach Mack Brown, Beamer has had great success at one school before running into bumpy terrain. The Hokies are just 13-11 overall and 9-7 in ACC play the last two seasons, which is a huge dropoff from where Beamer had this program for so long. Recruiting has also been shaky in recent years. With a new president and a new AD, this is a situation worth monitoring. Beamer has been adamant that he will know when the time is right to step away, so this season is big as the Hokies look to regain their footing atop an expanded and more difficult league. Beamer's contract ends at the end of 2016, and he is scheduled to become a special assistant to the president when he is done coaching. Will that come sooner rather than later? I'd expect the Hokies to have a plan in place for a graceful exit if it comes to it, but Beamer can ingratiate himself well to the higher-ups with a strong season in 2014. If the offensive line and run game are strong, Texas Tech quarterback transfer Michael Brewer should stabilize the offense. And the Hokies could better resemble the squads that ran off eight consecutive 10-win seasons before the two-year stumble.