The 2014-15 college football postseason continues on Friday with the Heart of Dallas Bowl between Illinois and Louisiana Tech at the Cotton Bowl.

Let's take a closer look at the matchup between the Fighting Illini and the Bulldogs. 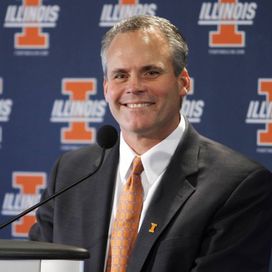 Tim Beckman has the Illini back in a bowl game.

The Fighting Illini are bowling for the first time under head coach Tim Beckman following a four-win 2013 campaign. The Illini posted three victories in their final five Big Ten games, including a 47-43 win against Northwestern on November 29 to earn a postseason berth. Who will start at quarterback for Beckman's squad? Oklahoma State transfer Wes Lunt (14 touchdown passes and just three interceptions) led Illinois to a 3-1 mark before injuries ruined his season. Lunt has seen action in just three games since because of a leg injury, so Reilly O’Toole (nine touchdowns and seven interceptions) needed to step in. There is no question that this Illini offense is more explosive with Lunt running the show, especially because the team's ground game is ranked near the bottom nationally at just over 117 yards per game. But Lunt returned from injury against Iowa and played poorly, allowing O’Toole to kind of run with the starting gig. He completed over 65 percent of his throws over the final two games and was a threat on the ground as well, so the fifth-year senior will start Friday’s game because of his leadership and grit. Lunt is expected to play at some point as well, and we'll see what kind of shape he is in after having a month off. However, whoever is in at QB will be going up against a Louisiana Tech defense that has really made strides under first-year coordinator Manny Diaz, whose stock is rising again after a rough finish at Texas. And the Illini have major depth issues across the offensive line. Louisiana Tech can put pressure on the QB, with a unit led by former Illini starter Houston Bates.

The Bulldogs, meanwhile, have had three losses this season by three points, including the Conference USA championship game against Marshall. Skip Holtz's squad, like the Illini, also bounced back from a four-win campaign last year to capture Conference USA’s West division and has a chance at reaching nine wins, which has only been accomplished twice over the last 30 campaigns. The offense is paced by running back Kenneth Dixon, who racked up 1,236 rushing yards and 21 touchdowns on the ground. While the Bulldogs can move the ball efficiently through the air as well (just three interceptions this fall), Illinois ranks No. 123 nationally against the run (nearly 250 rushing yards allowed per game and 28 touchdowns). Remember when Ameer Abdullah and Nebraska racked up 458 yards vs. the Illini?

Other notes: Louisiana Tech is favored by 6 points ... This is the first postseason appearance for Illinois since it beat UCLA 20-14 in the 2011 Kraft Fight Hunger Bowl and the first appearance for Louisiana Tech since losing 31-24 to TCU in the 2011 Poinsettia Bowl ... The Bulldogs won the lone meeting between the schools, which was a 52-24 win in Champaign on September 22, 2012 ... While Louisiana Tech did make it to the C-USA title game, the team also lost to FCS member Northwestern State and in overtime to Old Dominion.