The 2014-15 college football postseason continues on Saturday night with the Holiday Bowl between Nebraska and USC at Qualcomm Stadium.

Let's take a closer look at the matchup between the Cornhuskers and the Trojans.

The Cornhuskers won't have Bo Pelini roaming the sideline for this one, as athletic director Shawn Eichorst fired Pelini after seven seasons and a nine-win campaign this fall. Mike Riley, who left Oregon State to take over in Lincoln, won't be on the sideline for this one either. Interim head coach Barney Cotton will be in charge of the Huskers, and Riley will just be an onlooker. But Riley is familiar with the Trojans from his time in the Pac-12, so his expertise was surely put to use leading up to this game. An X-Factor in this contest could be freshman punt returner De’Mornay Pierson-El, who recorded an FBS-best 589 punt return yards this fall. Of course, the Trojans' main priority will be stopping star running back Ameer Abdullah, who is averaging 126.9 rushing yards per game and should be near his best after being slowed by a sprained left knee suffered on November 1 against Purdue. 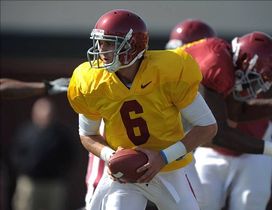 US PRESSWIRECody Kessler had 36 passing touchdowns against just four interceptions this fall.

The Trojans, meanwhile, are putting a bow on the first year of the Steve Sarkisian era, and the program won't have to worry about scholarship issues moving forward. Depth remains a concern in this season's finale, but the roster has always been littered with talent, including on offense with quarterback Cody Kessler (3,505 passing yards and 36 touchdowns against just four interceptions), receiver Nelson Agholor (97 receptions and 11 scores) and tailback Javorius Allen (111.4 yards per game). Defensively, All-America defensive end Leonard Williams leads the way. Kessler may have put together the most under-the-radar passing season in USC's storied history, but he'll have to be aware of where Huskers end Randy Gregory is at all times. The 'SC signal-caller currently has a completion percentage of 70.7, which is above the school season record of 69.1 percent by Matt Barkley in 2011.

Other notes: USC, which is making its first Holiday Bowl appearance, is favored by 7 points ... Nebraska is making its fourth appearance in San Diego since 1998 ... The Trojans lead the all-time series 3-0-1, but this is the first postseason meeting between the programs ... These programs have combined for 16 national titles ... As an assistant at USC, Sarkisian went 2-0 against Nebraska but went 1-2 against the Huskers as head coach at Washington.