The 2011-12 bowl season continues Wednesday night with the Holiday Bowl between Texas and California.

The Longhorns are 8-4 in bowl games under head coach Mack Brown, while the Golden Bears are looking to beat the 'Horns for the first time in five meetings. 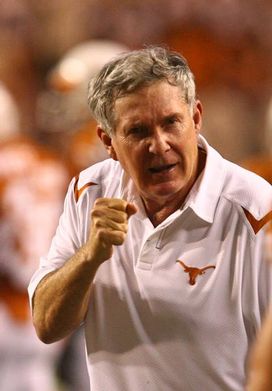 ICONMack Brown has the Longhorns back in the postseason after a one-year hiccup in 2010.

The Longhorns' streak of winning 10 games for nine consecutive seasons was snapped in a big way in 2010, as Mack Brown's squad finished 5-7, including a home loss to Texas A&M. This year, Texas managed to win seven games but limped toward the finish line.

While Case McCoy and dual-threat David Ash are still splitting time at quarterback for coordinator Bryan Harsin, it's clear that this offense has more jump when McCoy is on the field. He had his roughest game as a passer in the regular season finale against Baylor, throwing the first four interceptions of his career, but he also passed for 356 yards and three touchdowns. What will make him successful against Cal is a sound rushing attack, which hasn't been prevalent for the Longhorns when they lost three of their final four games. Freshmen Malcolm Brown and Joe Bergeron weren't healthy, and senior Fozzy Whittaker was lost for the year with a torn ACL against Missouri. The power running game could return against the Golden Bears, though, because Brown and Bergeron are both healthy after healing in the down time before this game. However, this Cal defense ranks 37th nationally against the run, allowing 130 yards per contest.

Defensively, first-year coordinator Manny Diaz received valiant efforts week in and week out, but an anemic offense was too much to overcome, especially in the finale against Baylor. Linebackers Emmanuel Acho and Keenan Robinson lead the front seven, but it was the strong secondary that really stood out.

Cal, meanwhile, enjoyed a strong finish to its season after suffering an awful 31-14 loss to UCLA in late October, its fifth loss in five games. But behind quarterback Zach Maynard, the transfer from Buffalo, the Bears became a more confident bunch. And it helped immensely that the running game became more efficient and Clancy Pendergast's defense became more stout. Wins against Washington State and Oregon State preceded a three-point loss at Stanford in which Maynard played well in his duel against Andrew Luck. The Bears then finished with a 47-38 win at Arizona State.

Cal star receiver Keenan Allen, Maynard's half-brother, caught 89 passes for 1,261 yards and six touchdowns, and he's been Cal's biggest impact player on offense. Will Maynard be able to find Allen enough against the suffocating Texas secondary? Maynard tossed seven touchdowns and just one interception in the month of November, so he's going to need to continue that strong play against Diaz's defense. Rrunning back Isi Sofele, who averaged 141.3 rushing yards in the last four games, must be able to find some holes against the Texas front seven and alleviate some of the pressure off of Maynard, who will be going against a Texas defense ranked 14th nationally.

Keep an eye on: Maynard and Sofele. Maynard has played much more consistent with the running game and defense playing well. But he has yet to see a defense quite like the unit run by Diaz. He needs to be turnover-free and not force any passes against a Longhorns secondary that has allowed only 25 plays of 20-plus yards through the air -- tied for 9th-fewest in FBS. Sofele's success is so critical because the Bears can ill afford to be in third and long against this defense.

The video below shows just how much of an impact Sofele can have on a game when he has room to run.