Stunning news has come out of Baton Rouge today as defensive back Tyrann Mathieu, a Heisman Trophy finalist last season, has been booted from the LSU football team.

Tigers head coach Les Miles announced at a press conference that the "Honey Badger" has been dismissed for violations of team policy. Miles said that Mathieu "gave us a lot of examples that we can learn from" and called him a quality guy with behavior problems. 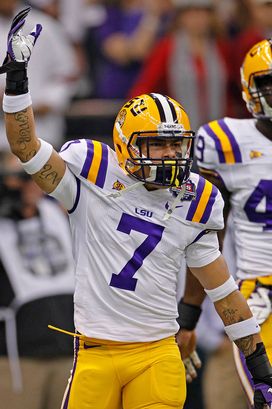 US PRESSWIRETyrann Mathieu's days with the Tigers are over.

Mathieu was suspended last year for one game for reportedly using synthetic marijuana. LSU never confirmed the specific reason of the suspension.

With Mathieu gone, junior Tharold Simon is the only cornerback of significant experience on the roster. The team has three true freshmen and one redshirt freshman at the position on the depth chart.

Simon and free safety Eric Reid are still star players in the Tigers' secondary, but Mathieu's ability to cause turnovers is unmatched. Redshirt freshman Jalen Collins is highly regarded around the LSU program, so he will have the best opportunity to step in right away at the open corner spot.

Expect Mathieu to look at FCS schools so he can play immediately, thus setting himself up for the 2013 NFL Draft. However, if it is determined that Mathieu was not eligible this season, according to LSU policy, then he will not be eligible for any team, including FCS, this fall.

No matter how this plays out, this is a potentially big blow to his draft stock and a big loss for college football fans. And especially for the LSU football team as it seeks a BCS national championship.