Is Gene Chizik on the hot seat?

It's a ludicrous idea, of course, considering that Auburn won the BCS national championship in 2010. But Tiger fans certainly aren't pleased after their squad was blasted by Mississippi State 28-10 in Starkville on Saturday afternoon. 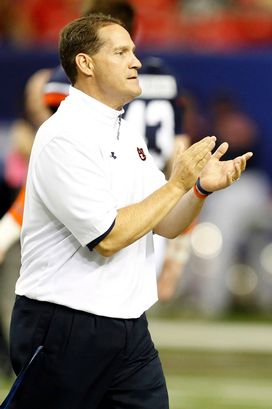 US PRESSWIREGene Chizik and Auburn dropped to 0-2 after the loss to Mississippi State.

Bulldogs head coach Dan Mullen finally notched a win over an SEC West opponent not named Ole Miss, and it came after so many heartbreaking defeats to Chizik's Tigers.

Mississippi State quarterback Tyler Russell went 20 of 29 through the air for 222 yards with three touchdowns and no interceptions, making things look effortless at times. His counterpart, however, struggled mightily.

Auburn's Kiehl Frazier accounted for five turnovers, including three interceptions as the Tigers struggled in obvious passing situations. First-year offensive coordinator Scot Loeffler's main challenge is maximizing Frazier's strengths while compensating for his weaknesses. The problem is that Frazier's weaknesses are youth, inexperience and decision-making. And that's not good, especially when the team plays in the rugged SEC West.

The Tigers will host Louisiana-Monroe next week before LSU arrives on The Plains the following week. Auburn then hosts Arkansas after a week off.

Of course, Leoffler and first-year defensive coordinator Brian VanGorder deserve plenty of time to install their new schemes. But with expectations raised while playing in the best conference in America, winning is always a priority. And there's no question the Tigers could be staring at a rough start to the season.

Let the Bobby Petrino chatter commence on The Plains.