How deep are the NCAA troubles for Oregon?

Oregon and the NCAA have agreed that at least one "major violation" was committed by the football program under its football coaches, according to The Oregonian.

And while the Ducks reportedly proposed to self-impose a two-year probation and reduce by one the number of scholarships for each of the next three seasons after the NCAA's investigation found wrongdoings into the Ducks' recruiting practices, the university will have to appear before the NCAA's Committee on Infractions because the two parties have not agreed upon the severity of Texas-based scout Willie Lyles' involvement in the violations. 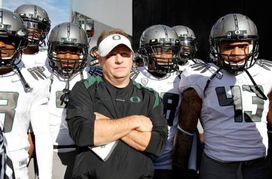 Lyles became a focal point of the investigation after it was found that he provided outdated recruiting material to the Ducks via his company, Complete Scouting Services. Oregon has agreed that it broke NCAA rules in its use of three scouting services: CSS, Elite Scouting Services and New Level Athletics. The Ducks accepted oral reports on players when only written reports and videos are permitted. Because of the unique nature of the case, the NCAA and Oregon have not agreed upon whether the violation constitutes a major or secondary violation.

The school is expected to have its infractions hearing "sometime this year." And as we know, the NCAA is never shy about taking its time on an investigation, so it's unknown when the hearing could be.

All was eerily quiet regarding the Oregon investigatoon until KATU, a Portland television station, obtained documents Monday night through a public-records request. Included were dispositions from athletic director Rob Mullens, who admits that the case is "major in nature."

Most of the misconduct acknowledged by Oregon occurred during the tenure of former head coach Chip Kelly, who left after last season to take over the NFL's Philadelphia Eagles.

According to the report, the NCAA enforcement staff did not find a lack of institutional control or unethical conduct during the ongoing investigation. However, the NCAA is considering Lyles a "booster" who provided an advantage to the school because he served "as a conduit to facilitate communication with prospective student-athletes."

And that's where things could be scary for the Ducks because that's where the major violation is alleged to have occured, not so much the sum of money Lyles received. Lyles, of course, had a mentoring/advising relationship with former Ducks running backs Lache Seastrunk and LaMichael James, among others.

It's important to note that the NCAA documents that were obtained in the reports from The Oregonian and KATU were from last September, which would be before the infractions committee rejected Oregon's request for a summary disposition in December. So Oregon's current situation is tenuous, especially with the unpredictability of the infractions committee, which will have the final ruling on the recruiting violations and penalties.

A rejection of a summary disposition isn't necessarily the worst news possible for the Ducks, but it obviously wasn't the news that they were hoping for either.

So fans and everyone associated with the Oregon program will continue to wait and be at the mercy of the NCAA. When will we find out more? Well, that's the age-old question when it comes to the NCAA every time an investigation is ongoing.