How Stanford can shut down the Oregon offense

But in order for the Cardinal to pull off the upset on the road, David Shaw's squad will need to slow down the Ducks' high-octane, up-tempo offense. And that starts with shutting down a dangerous rushing attack led by Heisman Trophy contender Kenjon Barner. 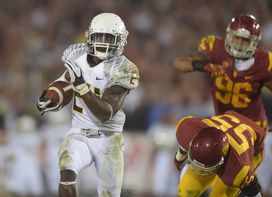 US PRESSWIREStanford will do its best to contain Kenjon Barner and the Ducks rushing attack.

Last week in Oregon's 59-17 win at Cal, a ground attack that had put up at least 400 yards in the previous three games was held in check. The Golden Bears held Barner to 65 yards on 20 carries, knocking him out briefly with a hard hit that sent him to the locker room in the first half. Keep in mind that Barner had a career day the week before against USC.

As many had expected, the Bears loaded the box with the purpose of shutting down Barner and the Ducks' running game. Consequently, the team had 180 yards of offense on the ground, the first time Oregon failed to rush for at least 200 yards since the 2011 opener against LSU. The problem for the Bears was that Marcus Mariota made the Bears pay for loading the box.

The dual-threat signal-caller, who himself was briefly knocked out of the contest, threw a school record-tying six touchdown passes and completed 27 of 34 passes for a career-high 377 yards as the Ducks set a major college football record by scoring at least 40 points for a 13th straight game. Mariota has stormed his way up the Heisman rankings in the past three weeks, as the redshirt freshman has completed 80 percent of his passes with 12 touchdowns and no interceptions.

So if the nation’s most explosive rushing attack, averaging over 6.0 yards per carry, is contained by the top run defense in America, which is allowing just over 2.0 yards per rush, Mariota will be key to the Ducks' offensive production. And because the Hawaii native is playing so well, Stanford may have to pick its poison: load up and stop the run or stay back and not allow Mariota to do damage.

The Cardinal, which have allowed just 586 total rushing yards this fall, will ultimately key on the run game, but Ducks head coach Chip Kelly and offensive coordinator Mark Helfrich will unquestionably remain patient and feed their backs the football if only to keep the play-action game alive and try to get the team's best pass-catchers, including De'Anthony Thomas, in space to make plays. The key for the Cardinal will be to continue to get pressure on Mariota when not bringing extra defenders as well as being successful when they disguise blitzes. And remain physical for a full 60 minutes of play.

In addition to being able to stop the run, the Cardinal lead the nation with 42 sacks. Outside linebackers Trent Murphy and Chase Thomas are big, strong and athletic, and the pair have combined for 24 tackles for loss, 11 sacks and 11 quarterback hurries this fall. End Ben Gardner has added 12 tackles for loss. Mariota, however, has the wheels to escape pressure, so Cardinal defenders will have to keep him guessing on where they might be coming from to keep the quarterback off balance.

While Stanford’s secondary ranks 99th in the nation in yards allowed, the team is 25th in pass efficiency defense. And safeties Ed Reynolds and Jordan Richards have combined for seven interceptions. If the Cardinal can get Mariota to make an uncharacteristic mistake or two and cash in on their extra opportunities offensively, the Ducks could be ripe for an upset. Keep in mind that Mariota has dealt with an injury to his left (non-throwing) shoulder and Barner has been nursing a thumb injury, two issues that are worth monitoring against a physical Stanford defense.

The main concern for the Cardinal, however, is wearing down defensively. In last season's contest, the Cardinal defenders were very active and in good positioning for the most part in the first half. But fatigue seemed to set in after the break, and making stops became more difficult as technique was affected by defenders seemingly getting tired. As we all know, poor tackling is often the result of fatigue. And it helped Oregon outscore Stanford 31-14 in the second half of last year's game. Of course, five Cardinal turnovers didn't help matters. But even in 2010, the Ducks outscored the Cardinal 28-0 after halftime.

If the Stanford defense can force some three and outs or at least stall some Oregon drives early, it could be a close contest in the second half. And if the Cardinal offense can move the football against a depleted Ducks defense, perhaps it will be Upset City in Eugene. Perhaps.