Huge spot for Jones against K-State

Huge expectations were placed on Oklahoma quarterback Landry Jones when he stepped in for Heisman Trophy winner Sam Bradford in 2009 when the current St. Louis Rams quarterback was set back by injuries.

But despite throwing for nearly 13,000 yards and 97 touchdowns in his career and holding the school records for passing yards, completions and touchdowns, many around the world of college football point to the 42 interceptions Jones has tossed, his lack of Heisman hardware and the fact that the Sooners have been unable to claim a BCS national championship with him under center. 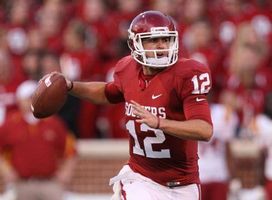 Landry Jones and OU are hoping to open Big 12 play with a win over K-State.

With OU sitting at 2-0 and beginning conference play on Saturday night in Norman against Kansas State, Jones has an opportunity to showcase his talents on a primetime national stage and get the Sooners back into BCS title talk.

And he can silence his critics as well.

The 6-4, 218-pounder is completing 62.5 percent of his passes through two games against UTEP and FCS squad Florida A&M this fall, and he has not looked like the same prolific signal-caller since star receiver Ryan Broyles went down with a season-ending injury last fall. His completion percentage is better than only Kansas' Dayne Crist in the Big 12, and he's averaging just 7.4 yards per attempt. K-State's Collin Klein and West Virginia's Geno Smith have stolen his thunder as the most Heisman-worthy signal-callers in the conference thus far, and Klein will be looking to steal the show in Norman this weekend.

The senior Jones spent extra time during OU's bye week working with first-year receivers Justin Brown and Trey Metoyer, as he looks to get more comfortable with the playmakers who need to take some pressure off of junior Kenny Stills in the passing game. Brown, a transfer from Penn State, and the freshman Metoyer have combined for 13 catches through the first two games. The bye came at a great time for the Sooners as they continue to break in new skill players on offense.

With K-State being the first tough battle of the season for OU, it's the perfect time for that extra work with receivers to pay off. Much has been made of Jones' struggles in the post-Broyles era, so Saturday night will present the perfect opportunity for the leader of the offense to show that the unit can get back to its prolific ways. And to show that the offense is good enough to potentially advance far enough to challenge an Alabama or an LSU defense in a potential BCS title game.