If A&M bolts to the SEC…

Remember those Texas A&M-to-the-SEC rumors that grew louder when Texas’ Big 12 rivals became upset over the possibility of high school games being aired on the Longhorn Network?

Well, they’re back. And they seem to be very legitimate.

According to the Dallas Morning News, Texas governor Rick Perry — a Texas A&M alum — said “conversations are being had” regarding possible SEC membership for the Aggies. Perry did not specify to the paper if the conversations were internal or with SEC officials. SEC commissioner Mike Slive could not be reached for comment.

A&M president R. Bowen Loftin recently acknowledged the “uncertainty” of the school’s membership in the 10-team Big 12. The fact that the rival Longhorns essentially work as a de facto independent seem to be one of the leading causes. Call it an inferiority complex, which the Aggies have always seemed to have when it came to the Longhorns.

The statement released by the university Wednesday didn’t exactly calm the storm.

“President Loftin is committed to doing what is best for Texas A&M not only now, but also into the future," the statement read. "We continue to have wide-ranging conversations regarding all aspects of the university, including both academics and athletics.” 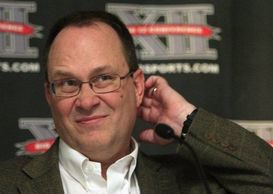 Will Big 12 commissioner Dan Beebe have to go looking for a school to fill the void left by a possible Texas A&M departure?

“I’ve been talking to a number of people,” Beebe told the paper. “Obviously, there are a significant number of Aggie supporters who are interested in going in that (SEC) direction.

“There’s a huge risk if an institution leaves its geographic proximity and rivalries. In the long run, it can create a lot of problems.”

As we all remember, the Aggies and the SEC had discussions last summer when it looked as if the Big 12 was about to crumble. But Texas saved the conference by opting not to go to the expanding Pac-10, instead staying in the Big 12 and forming its Longhorn Network.

I’ve maintained throughout this process that if Texas A&M was to leave for the SEC, it would be with Oklahoma. After all, the SEC would need a 14th team if the Aggies entered the conference. Of course, OU and Oklahoma State are a package deal, so the SEC would have to go the 16-member route — the major step en route to Superconferences. Is Slive determined to become the commish of the nation’s first 16-team football league?

Let’s speculate a little bit as to how the Big 12 could possibly survive if A&M went to the SEC without Oklahoma and Slive went a different direction for a 14th member. After all, OU will get its own network and prefers a Midwest league. ABC/ESPN would want the Big 12 to live on because it owns the league’s first-tier rights, and Fox Sports wants to see this through because it gets second-tier rights starting in 2012. In addition, keep in mind that Texas can’t bring the Longhorn Network to another league. Would it really want to be independent — because its basketball team wouldn’t be able to remain a Big 12 member either?

Let’s take a look at possible programs the Big 12 could add if Texas A&M — and only Texas A&M — leaves the conference for the SEC.

Arkansas: If the Razorbacks left the SEC, then Slive would be back where he started — with 12 teams. But I just can’t see the Hogs leaving a conference where they finally are starting to feel a little more comfortable. While they would have a few old Southwest Conference rivals to reconnect with, they lose the Aggies. Plus, with the Big 12 involved in so much turmoil the last two offseasons, why would the Arkansas administration roll the dice. Tougher conference still means brighter future in this case.

ICONGetting Brian Kelly and the Irish would be a coup for any league, but it won't be the Big 12.

Notre Dame: Beebe has to make the Fighting Irish administration one of his first phone calls. Do I believe ND is happy as an independent? Absolutely. Could I see the program ever becoming a member of a conference? I never used to, but a changing landscape may make it necessary — eventually. Just not now, and certainly not in the Big 12.

BYU: The Cougars would be a very good “get” for the league, especially because of their television market. But the BYU administration seems set on enjoying independence after getting shafted by the Pac-10 last offseason.

Houston: Last June, two dozen Houston lawmakers sent a letter to the Big 12 petitioning the conference to invite the Cougars, who were members of the Southwest Conference until 1995 when it was forced to move to Conference USA after the formation of the Big 12. The problem for Houston is that it plays in a stadium which only seats 32,000 fans. Cougar fans should be thrilled that head coach Kevin Sumlin is still there, but I’m not sure Beebe would look to add this program. Plenty of eyes are already on the Big 12 from the Houston market.

Louisville: The Cardinals have a decent-sized television market, one which is bigger than Memphis, New Orleans and Buffalo. And the overall program is healthy, with an Orange Bowl win and men’s Final Four among its recent accomplishments. Charlie Strong is ready to bring this program to the upper-tier of the Big East, and its beautiful stadium holds enough fans after expansion (55,000) to be a viable option.

Air Force: Service academies don’t quite worry about money like other BCS schools, as their main goal is to increase enlistment numbers. Playing games all over the nation helps Army and Navy, which is a main reason why those programs are indies. The Falcons would definitely see increased national attention on TV, however, by playing in the Big 12. And they have one of the best coaches in Troy Calhoun that no one seems to know about nationally.

It seems inevitable that the Aggies are SEC-bound. What's less certain is the future of the Big 12, which is in midst of a chaotic offseason once again.