If Chizik is fired, Auburn should reach out to Pelini

As is typically the case, there will be plenty of head-coaching openings at programs across the country this offseason, and some of the voids may be at traditional football powers. 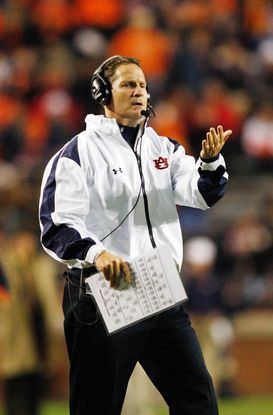 US PRESSWIREWill Gene Chizik get a chance to turn Auburn around in 2013?

One school that could be looking for a new face of the program is Auburn, which would have to give current head coach Gene Chizik a $7.7 million buyout, according to The Opelika Auburn-News, if president Jay Gogue and athletic director Jay Jacobs (whose job could be in danger) decide to make a change. That figure would drop to $7.5 million if he is fired after November 30.

Last week 247Sports affiliate AuburnUndercover.com cited multiple sources claiming that Gogue has told members of the school's Board of Trustees that he is preparing to dismiss Chizik. Of course, Auburn would also have to buy out first-year coordinators Brian VanGorder and Scot Loeffler as well as the entire staff. In total, that figure could be more than $10 million.

We've heard a lot of names thrown around across all mediums regarding potential replacements at Auburn if Chizik is let go. One name that hasn't really been mentioned is Nebraska head coach Bo Pelini, who was once the defensive coordinator at LSU.

This past summer I talked to a veteran Big Ten observer who believes that Pelini desires a bigger job and would strongly consider a return to the SEC given the right situation. While it is unknown if either party would be interested if there is an opening on The Plains, Gogue should strongly consider reaching out to Pelini, who is 47–18 overall in Lincoln and 27–11 in conference play (Big 12 and Big Ten).

With a defensive background, Pelini would be an intriguing candidate to come in and maximize the talent of the young Tiger defenders that Chizik and his staff have been able to bring in along the recruiting trail. Pelini currently has Nebraska positioned for a possible Rose Bowl berth with the Huskers sitting at 8-2 overall and 5-1 in the Big Ten Legends division.

If Pelini is looking to leave Nebraska, this offseason could be the perfect time to do so if he sees the right opportunity presented to him.