Much has been made of the breakout season for Illinois running back Mikel Leshoure — and rightfully so. The 6-0, 228-pounder, who is eighth in the nation in rushing at 124.6 yards per game and was named this week to the All-Big Ten first-team, is coming off an incredible 330-yard rushing effort against Northwestern on Nov. 20 at Wrigley Field. And it’s quite possible that Leshoure will use his fantastic junior campaign as a springboard to the NFL, much like former Illini Rashard Mendenhall when he was the team’s primary ball carrier during the 2007 Rose Bowl season.

But perhaps the most important reason for the Illini’s offensive fortunes turning this season under new coordinator Paul Petrino has been quarterback Nathan Scheelhaase.

Scheelhaase, the signal caller of the pro-set offense, has played much better than your average redshirt freshman quarterback, throwing for 1,522 yards and 16 touchdowns against 8 interceptions. The 6-3, 195-pounder has also rushed for 684 yards and three scores on the ground while putting his athletic ability on display to move the ball on broken plays.

Even better for the Illini is that Scheelhaase continues to improve on a game-by-game basis. In the last five contests, he has thrown 12 touchdowns against just one interception. 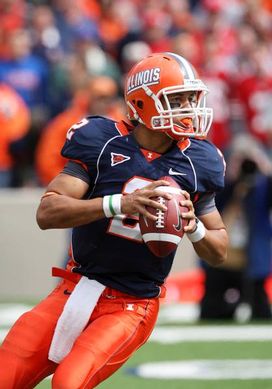 In fact, the offensive unit as a whole has been lights out in the past five games — a direct reflection of a quarterback who’s not afraid to take command of a huddle.

Since its 26-6 loss to Michigan State in East Lansing on Oct. 16, Illinois has averaged 46.8 points and 442 yards per game — monster numbers considering the unit averaged just over 21 points and 320 yards in their first five contests. It also helps that the Illini are taking care of the football, giving it away to the opponent just five times since that loss to the Spartans.

The offensive line has also been more physical, looking more like a Big Ten unit than in years past.

But the face of the offense, especially because he seemingly has such a bright future, is Scheelhaase, who lost out to Wisconsin running back James White for Big Ten freshman of the year honors.

Teammates have marveled all season about his maturity and his ability to handle so much as a redshirt freshman.

Take the game at Michigan Stadium against the Wolverines, for example, when the Illini were involved in a shootout never before seen in the Big Ten. With over 111,000 fans in attendance, Scheelhaase and the Illini matched the Wolverines nearly score for score — including three overtime touchdowns — until finally coming up short on a 2-point conversion attempt. Most impressive was that he didn’t turn the ball over once in that game.

The hard work put in with Petrino and quarterbacks coach Jeff Brohm was never more evident.

The Illini have one last test Friday night at Fresno State — the same squad that won a thrilling 53-52 game in Champaign last season when a Bulldogs offensive lineman caught a deflected pass on a two-point conversion.

If the Illini can pull off the victory, it will be their fourth in the final six contests. Could a Florida bowl game, perhaps the Outback, be on the horizon? Of the Big Ten members, the Illini have the longest Outback Bowl drought, last earning a berth during the 1990 season. If not the Outback, perhaps a bid to the Texas Bowl in Houston.

Nonetheless, no matter how many yards Leshoure accrues on the ground, keep in mind that the offense would be nowhere near as prolific without that steady signal caller — the seasoned veteran, er, redshirt freshman.