With the 2012 college football season just around the corner, let's take a look at some of the freshmen defensive players who may be primed to make an immediate impact on their teams.

LB Joe Bolden, Michigan: The Wolverines earned a berth to the Sugar Bowl in head coach Brady Hoke's first season largely because of Greg Mattison's magic touch on the defensive side of the ball. The strength of the 2011 squad was the defensive line, but the departures of Mike Martin and Ryan Van Bergen make it imperative that the Wolverines get instant impact from some of their newcomers. Enter Bolden, who is an east-to-west quick outside 'backer. He needs to continue to put on weight without losing his speed, however, but he has a chance to become a big part of this defense by the end of the fall.

CB/S Travis Blanks, Clemson: If you saw Clemson's disastrous effort defensively against West Virginia in the Orange Bowl, you know that the secondary needs immediate help. And new defensive coordinator Brent Venables received some immediate aid in the form of Blanks, who is a capable playmaker. He was an excellent wide receiver in high school, so his ball skills are prevalent along with his ability to lay a licking on the opponent. He was one of the top defensive backs in the Class of 2012, and he began his Clemson career by enrolling early. While he missed half of his senior season due to injury, he recorded 104 tackles, four interceptions, 35 receptions and eight touchdowns as a junior. He had a strong spring and will get tons of work at nickelback. Because he fits at cornerback or safety, playing nickelback will allow him to utilize all of his best abilities. 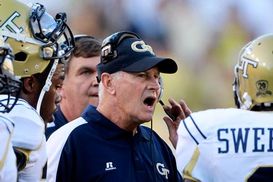 Al Groh's Georgia Tech defense could get a boost from LB Jabari Hunt-Days.

LB Jabari Hunt-Days, Georgia Tech: If there has been one thing holding Georgia Tech back since its Orange Bowl appearance against Iowa a few years ago, it has been its defense. So defensive coordinator Al Groh knows that work needs to be done as he enters his third year in Atlanta. And Hunt-Days, the younger brother of backup quarterback Synjyn Days, could help in that department. Hunt-Days will get a long look at inside linebacker after redshirting in 2011. He has added weight and could wrest the starting job away from Daniel Drummond, who will miss the season opener due to a suspension.

S Landon Collins, Alabama: The Crimson Tide are re-shuffling their secondary after losing three of four starters from their national title team. Collins should see action immediately in the safety rotation, particularly at strong, because he has good instincts, athleticism and is a big hitter. The true freshman was one of the most sought-after defenders in last year's recruiting cycle.

DE Arik Armstead, Oregon: Ducks head coach Chip Kelly finally landed his standout defender on the recruiting trail this past February, so it will be interesting to see if Armstead could make an immediate impact in Nick Aliotti's defense. The Ducks have had solid defensive linemen in the past, but Armstead could emerge as a game-changer. If he can have half the impact that De'Anthony Thomas had last year on offense, Aliotti and Kelly will be ecstatic.