With the 2012 college football season just around the corner, let's take a look at some of the freshmen offensive players who may be primed to make an immediate impact on their teams.

WR Trey Metoyer, Oklahoma: Quarterback Landry Jones looked lost last season when star receiver Ryan Broyles went down with injury. With Broyles moving onto the next level with the Detroit Lions, the veteran Sooners signal-caller has needed to permanently adjust to life without his clutch receiver. So Metoyer, a former five-star recruit from Chatham (Va.) Hargrave Military Academy, could emerge as a top option. He signed with OU last year but didn’t qualify. Now, he could be the playmaker on the outside that this offense needs because he possesses the explosiveness to get down the field. The Sooners also added Penn State transfer Justin Brown to the mix to take some of the pressure off of Kenny Stills, but everyone around the OU program is intrigued by the 6-1, 190-pound Metoyer, especially with the returns of Jaz Reynolds and Trey Franks in question and Kameel Jackson recently dismissed.

RB T.J. Yeldon, Alabama: Eddie Lacy will likely get the majority of the carries with Trent Richardson moving on to the NFL, but Alabama's 2011 Mr. Football will get a chance to receive a good number of handoffs because Crimson Tide head coach Nick Saban likes to spread the wealth. After arriving as an early enrollee, Yeldon impressed the coaching staff in the team's A-Game, where he recorded a 50-yard touchdown reception. The 6-2, 216-pounder finished the day with 91 receiving yards and 88 yards on the ground. He will also battle Dee Hart for reps, but Hart could have a bigger impact on special teams as a returner.

WR Stefon Diggs, Maryland: The Terrapins suffered a brutal blow to their season when starting quarterback C.J. Brown went down with a torn ACL. So head coach Randy Edsall will look to a freshman signal-caller to take over in College Park. Because of the youth under center, it will be interesting to see how that affects the playmakers around him. Diggs was one of the top receivers in the Class of 2012, and he decided to stay in-state and play for the Terps. In his final prep season, the 6-1, 185-pounder had 770 receiving yards on just 36 catches and eight touchdowns. And because receiver was a sore spot in 2011, Diggs will get immediate playing time for the Terps. But his true value could be on special teams, where he will get to return kicks. Former high school teammate Wes Brown should also get a look at running back. 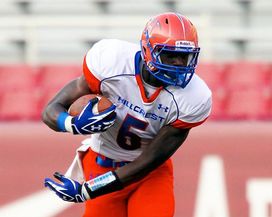 Dorial Green-Beckham should be a factor against SEC defenses in his freshman year.

WR Dorial Green-Beckham, Missouri: It might be a stretch to consider DGB the closest thing we have seen to Calvin Johnson and Randy Moss at the college level. But the 6-6, 220-pounder, who was the nation's top recruit last year, has all of the physical tools to be a dominant receiver from day one in the SEC as long as he can beat press coverage. T.J. Moe will put up bigger numbers in 2012, but quarterback James Franklin will not hesitate to get the ball into DGB's hands as much as possible.

WR Deontay Greenberry, Houston: Don't forget that Greenberry shocked Brian Kelly and Notre Dame by signing his Letter of Intent on National Signing Day and sending it to Houston, which must replace five of its top six receivers, its starting quarterback and head coach. Expect Greenberry to be a major contributor right away with David Piland at quarterback. The 6-2, 185-pounder is physical and has good hands, and he was a real steal for the Cougars this past signing class.

RB Michael Holmes, Virginia Tech: No matter who departs Blacksburg and moves onto the NFL from the running back position, head coach Frank Beamer always has one ready to step in and produce. Enter Holmes, a redshirt freshman whose hard work will earn him the starting gig. He earned top offensive newcomer honors during the team's spring practice, showing the coaching staff that he has very good vision and can excel at blocking. And the 6-foot, 208-pounder will have a chance to shine on a bright stage as the Hokies are a BCS darkhorse.

QB Wes Lunt, Oklahoma State: The Cowboys' freshman signal-caller makes this list because it's tough to imagine head coach Mike Gundy and offensive coordinator Todd Monken choosing him as the starter if they didn't have confidence in the young QB's maturity. It will be intriguing to see how Lunt adjusts to running a major-college offense and to see if the unit remains prolific despite ths losses of Brandon Weeden, Justin Blackmon and Kendall Hunter. There is solid depth behind the 18-year-old Lunt, so he will have to show that he can effectively run this high-octane unit. But he'll be working behind a veteran offensive line, and he could have a nice safety option in junior-college tight end Blake Jackson.

RB Duke Johnson, Miami (FLA): While senior Mike James will be the starter in Coral Gables, the true freshman Johnson will see plenty of action with the Hurricanes starving for playmakers. Despite looming NCAA sanctions, head coach Al Golden was able to get Johnson to remain committed along with the rest of the strong 2012 signing class. The 5-9, 183-pounder is very fast and good catching the ball out of the backfield, so he will see the field immediately as a nice complementary option to the bigger James.