Graduate transfers have taken on a greater role across the college football landscape since the NCAA passed a graduate-transfer exception in 2006.

While some of these "free agent" players may not have quite the same effect as Russell Wilson had on the Wisconsin offense when he arrived in Madison via NC State in 2011, these players should positively impact their squads this fall after transferring into a grad program.

Alabama QB Jake Coker: Once preseason camp opens, all eyes will be on the former backup to Jameis Winston at Florida State. Coker, who played at the same high school as AJ McCarron, has good size and a very good arm. And while the Tide have some highly recruited signal-callers on the roster, senior Blake Sims and Co. did not 'wow' in the spring game (although they were running a bit of a watered-down offense). Coker has zero career starts and missed spring, so the starting job won't be handed to him. But he didn't leave Tallahassee to stand on the sidelines either. And he fared very well in his battle with Winston last offseason.

Notre Dame CB Cody Riggs: The former Florida defender moved around the secondary with the Gators, playing both cornerback and safety, but he is expected to play corner for Brian Kelly's Irish. He has 26 starts in his career, and he gives the Irish a much-needed boost for their secondary. ND has a tough slate in 2014, so his arrival helps immensely — especially for games against Florida State and USC. Overall in 40 career games, Riggs has 107 tackles (9.5 for loss), two sacks, one interception and a forced fumble.

Ohio State C Chad Lindsay: A former offensive lineman for Nick Saban's run-heavy offense, Lindsay is a big addition for the Buckeyes because they are remodeling up front. He has starting experience in the SEC and had a chance to start this season for the Tide. Urban Meyer's Power Spread offense is expected to be even better despite losing running back Carlos Hyde because Braxton Miller is in his third season running the scheme, and Lindsay will be an anchor on that all-important O-Line.

Virginia Tech QB Michael Brewer: The Hokies are trying to replace the polarizing Logan Thomas, and it was slim pickings this spring for Frank Beamer and his staff. Brewer was expected to be the starter for Texas Tech last year but dealt with a bad back, while Mark Leal wasn't impressive in limited time for the Hokies last season and could struggle to hold off Brewer because of his subpar spring. Brewer is a pretty sound passer, but the question is whether the Hokies have a good enough offensive line and enough skill players to help him out — something Thomas didn't really have the last two seasons. 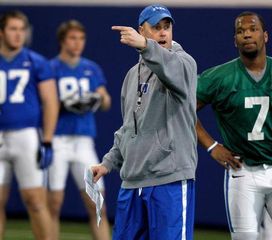 New Florida OC Kurt Roper has a nice weapon to work with in TE Jake McGee.

Florida TE Jake McGee: The arrival of Kurt Roper from Duke as the new coordinator is huge for the Gators. Of course, Jeff Driskel needs to remain healthy under center and some weapons at receiver such as Demarcus Robinson need to emerge. But the offense will get a boost from McGee, who arrives from Virginia as a solid pass-catching option especially when plays break down. He was the Cavaliers' leading receiver in 2013, as he had 43 catches for 395 yards and two touchdowns.

Fresno State QB Brandon Connette: Duke had a breakout season last year, earning a spot in the ACC title game in large part because of an offense that was prolific under head coach David Cutcliffe. Part of that offense was the presence of Connette, whose dual-threat ability helped him set a school record with 31 rushing touchdowns. While he certainly won't be the aerial threat that Derek Carr was while succeeding as the nation's leading passer in 2013, Connette's success with the Blue Devils will serve him well as he battles Brian Burrell and Co. in preseason camp.

West Virginia DE Shaquille Riddick: Not a lot of college football fans may be familiar with the Gardner-Webb transfer, but Riddick ranked second in the FCS in tackles for loss and had 8.5 sacks in 2013. The Mountaineers were desperate for new and improved pieces on defense, and Riddick gives Dana Holgorsen's team a serious NFL prospect. The FCS All-American is expected to replace this past May's NFL third-round draft pick Will Clarke, so new defensive line coach Tom Bradley has to be excited.

Illinois DE/LB Houston Bates: The defender left the Illini to be closer to home, so he is now going to play for Skip Holtz at Louisiana Tech, where he will fill a similar hybrid role as he did in Champaign. He started all 12 games for the Illini in 2013, and he ranked second on the team in tackles for loss (12) and second in sacks (3.5) last fall.

Miami (FL) QB Jake Heaps: The well-traveled former BYU and Kansas signal-caller has a chance to start for Al Golden and the Hurricanes because of the injury to projected starter Ryan Williams, who is shelved after tearing his ACL. He is trying to come back by late September, but the 'Canes have been preparing redshirt freshman Kevin Olsen for starting duties in the meantime. The arrival of Heaps, though, leads many to wonder if the 'Canes have doubts about Olsen's readiness. Heaps will battle Olsen, redshirt sophomore Gray Crow and true freshmen Brad Kaaya and Malik Rosier in preseason camp, but it's really a battle between Olsen and Heaps, who was one of the top-rated pro-style signal-callers in the country coming out of high school. The question is whether Heaps more resembles the QB who set BYU freshman passing records for yards, touchdowns and wins or the one who struggled in a bad offense in Lawrence.

Other transfers of note

— QB Kendal Thompson has transferred to Utah from Oklahoma.
— QB Stephen Rivers, the younger brother of San Diego Chargers quarterback Philip Rivers, transferred from LSU to Vanderbilt.
— QB Andrew Hendrix will play next season at Miami (OH) after graduating from Notre Dame.
— QB Pete Thomas, who began his career at Colorado State before leaving for NC State, is now at Louisiana-Monroe.
— QB Tyler Murphy graduated from Florida and is resuming his career at Boston College.
— O-Lineman Ian Silberman, who was at Florida, is now at Boston College.
— DE Jordan Allen, who was at LSU, will continue playing at Arizona.
— O-Lineman Malcolm Bunche is done playing at Miami (FL) and is now at UCLA.