With the 2014 college football season on the horizon, let's take a look at some redshirt freshmen who are ready to take the field and make an impact for their respective teams.

Clemson CB Mackensie Alexander: The Tigers would have been able to utilize Alexander's talents last season, but he was knocked out by a preseason groin injury. With Dabo Swinney's squad needing help at cornerback this fall, the Florida product should find a starting spot after having a strong spring. And he could be primed for all-ACC honors. Fellow redshirt freshmen Adrian Baker and Marcus Edmond will also provide better depth in the secondary.

Arizona State S Marcus Ball: Like Alexander, Ball was felled by a preseason injury that prevented him from contributing to the Sun Devils last year. But he is expected to be a starter this fall, and he has very good size to be an effective Pac-12 defender. He is slated to be the team's bandit safety but could be moved to spur linebacker. There is versatility to his game, which is nice because ASU lost nine starters from its 2013 defense. 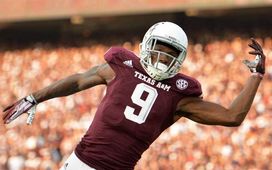 Ricky Seals-Jones should be a nice red-zone weapon and more for A&M.

Texas A&M WR Ricky Seals-Jones: We saw how explosive the mammoth wide receiver could be last year when he burst free for a 71-yard touchdown in the opener against Rice before an injury derailed his season. Now healthy, he can help make up for the loss of fellow big-bodied Mike Evans. Whether Kenny Hill or Kyle Allen starts at quarterback, he will have a top red-zone weapon in Seals-Jones, who should wreak havoc on smaller DBs.

Texas OL Darius James: The Longhorns should benefit from his versatility, as a lot of competition has been created with the new coaching staff. He could end up at offensive tackle, where he was in the spring. But he could also move inside with both guard spots in flux. New Longhorns offensive line coach Joe Wickline certainly inherits an intriguing prospect as the 'Horns look for four new starters up front.

Florida State LB Matthew Thomas: The Seminole actually was able to see the field as a true freshman last season before undergoing shoulder surgery. Jimbo Fisher's squad lost Telvin Smith and Christian Jones from last year's linebacker corps, so Thomas will have a chance to shine. Keep in mind that he was one of the nation's top overall recruits in his class.

Notre Dame RB Greg Bryant: The former heralded recruit recorded just three carries last year before tearing a knee ligament, so he received a medical redshirt. The Fighting Irish have backfield depth but no true No. 1, so Bryant will have a chance to get a decent amount of carries if he can outwork senior Cam McDaniel and sophomore Tarean Folston. He is a potential game-breaker with good pass-catching skills.

Oklahoma State WR Ra'Shaad Samples: The Cowboys lost three productive receivers from last season's squad, so the speedster has a chance to become one of the team's top weapons for whoever wins the starting quarterback job.

Alabama WR Robert Foster: The Crimson Tide have the most offensive weapons they've had since the arrival of Nick Saban. Foster was not cleared by the NCAA until before fall camp last year, so it was difficult for him to get a hard look. But he was one of the very best receivers in the 2013 class and should be able to at least be the No. 3 with the Tide behind Amari Cooper and Christion Jones. He has big-play ability.

Miami (FL) QB Kevin Olsen: I wouldn't have put Olsen on this list because I have concerns about his readiness, mostly because of some off-the-field issues. But the health status of projected starter Ryan Williams is still unknown, and former BYU and Kansas signal-caller Jake Heaps is a new arrival. Olsen was said to have been becoming a better leader, but I think Heaps will win the job at least until Williams is ready to play after recovering from his ACL injury.