Recently at the NFP I broke down some of the most intriguing quarterback battles taking shape across the country, which includes competitions at major programs such as USC and Oklahoma State.

Today, let's take a look at some of the transfer quarterbacks who are eligible to play right away and are making their presence felt at preseason camps all over the nation.

Drew Allen, from Oklahoma to Syracuse

Former Orange head coach Doug Marrone did a fantastic job of further developing Ryan Nassib, who was selected by the New York Giants in this past April's NFL Draft. Now, first-year Orange head coach Scott Shafer must decide on a new starter between Drew Allen and sophomore Terrell Hunt. Allen has the physical tools to get drafted, but he is learning a new offense. However, it would be hard to imagine the former OU signal-caller not winning the job and starting the season opener on August 31 against Penn State because he is becoming more comfortable with the offense this preseason. 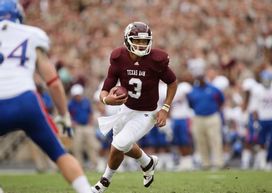 US PRESSWIREJameill Showers will get a chance to start at UTEP after transferring from A&M.

Amazingly, Showers could have potentially started in College Station this season depending on what happens with the NCAA investigation of Heisman Trophy winner Johnny Manziel. Keep in mind that Showers was narrowly beaten out by Johnny Football for the starting gig last preseason after serving as the backup to eventual Miami Dolphins first-round draft pick Ryan Tannehill. Now with the Miners, Showers will have a chance to become one of the best signal-callers in the non-BCS level of the FBS. He has a strong arm, good mobility and strong leadership skills.

Jake Heaps, from BYU to Kansas

Second-year Jayhawks head coach Charlie Weis is going all-in on JUCO transfers this year, which is always a tricky proposition. But the one stable aspect of his program in 2013 should be under center, where former BYU starting signal-caller Heaps has a chance to revert back to the form he showed in his first season in Provo. Heaps set numerous BYU freshman records, including ones for passing yards (2,316), completions (219), passing touchdowns (15), wins (six) and games played (13). Call it a sophomore slump or growing pains, but he eventually lost his job to Riley Nelson and decided to exit. So after sitting out a season, Heaps will try to bring much-needed excitement to Weis and the Jayhawks.

Tom Savage, from Rutgers via Arizona to Pittsburgh

The well-travelled Savage was in a competition with redshirt freshman Chad Voytik for the starting gig, but second-year Panthers head coach Paul Chryst made it official on Wednesday by choosing the veteran signal-caller as the team's starter as it gears up for its debut in the ACC. The former Rutgers and Arizona quarterback will lead the Panthers into their season opener against Florida State, and the hope for Panthers fans is that he plays like the freshman All-American that he was in 2009, when he passed for 2,211 yards with 14 touchdowns. Voytik had a nice performance in the spring game, and he is the future. So Savage will need to play well to hold off the youngster.

Connor Wood, from Texas to Colorado

The Buffaloes appear to be close to naming the fourth-year junior Wood as their starter, as the former Texas transfer who was named a team captain this summer has developed good chemistry with his receivers as the team prepares for its opener against Colorado State on September 1. Head coach Mike MacIntyre said that injured senior quarterback Jordan Webb, the former Kansas Jayhawk, is ahead of schedule in his rehab from a torn ACL he suffered in spring practices but said it is possible that Webb could transfer to a Division II program and play his final season of eligibility next year. Sefo Liufau, a gem in MacIntyre's first recruiting class, has impressed and is splitting snaps with sophomores Jordan Gehrke and Stevie Joe Dorman. But Wood's improvement during the spring after rough patches off the bench last year give him the edge. He has good size, a nice arm and experience with the Pistol formation from his time at Texas.

Other transfers to keep an eye on: Allan Bridgford from Cal to Southern Miss; Steven Bench from Penn State to South Florida; Jesse Scroggins from USC to Arizona; Brandon Mitchell from Arkansas to NC State; Clint Trickett from Florida State to West Virginia.