The 2011-12 bowl season continues Friday night with the Insight Bowl between Oklahoma and Iowa in Tempe.

The Sooners are playing in their 13th straight bowl, all under head coach Bob Stoops. The Hawkeyes, meanwhile, will be playing their 10th bowl game since 2001 and will look to extend their school-record bowl winning streak to four games. They will also look to win their second consecutive Insight Bowl after their dramatic win over Missouri last season.

Before the season began, many believed that Oklahoma was primed for a berth in the BCS national championship game in New Orleans. The Sooners bested Florida State in their big nonconference road test, but the team's glaring weakness showed up against Texas Tech in Norman: pass defense. The Sooners fell to the Red Raiders as well as Robert Griffin III and Baylor before being smashed by in-state rival Oklahoma State. While injuries played a role, no one could have foreseen such porous defensive efforts in their losses. 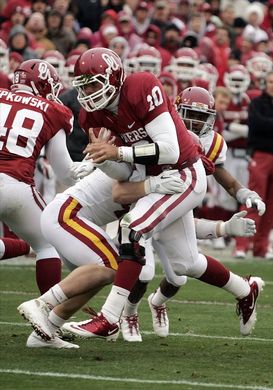 Now, OU looks to finish the season on a high note in a rare December bowl game. But Stoops and Co. will have to do it without top receiver Ryan Broyles and leading rusher Dominique Whaley, who were lost for the season with injuries. Can Blake Bell and the "Bell Dozer" formation bring life to an offense that is struggling on the ground? And can quarterback Landry Jones finish the season -- and perhaps his career in Norman -- on a high note after the disaster against the Pokes? Oklahoma’s all-time leader in passing yards and touchdowns will be going up against a Hawkeyes defense that had to replace many of their best players on the defensive line and safety this season, so Iowa defensive coordinator Norm Parker will be tested in his last game with the Hawks. But Jones has really struggled without Broyles, throwing five interceptions and no touchdowns in the past three games. Iowa cornerback Micah Hyde had the game-clinching pick-six in last year's bowl win over Missouri, so keep an eye on him and fellow corner Shaun Prater.

Meanwhile, the Hawkeyes will be hard-pressed to establish any type of a ground attack with Marcus Coker suspended for disciplinary reasons. The sophomore finished the regular season second in the Big Ten in rushing with 1,384 yards and 15 touchdowns on 281 carries. In addition, freshman running back Mika'il McCall has left the team, leaving head coach Kirk Ferentz with serious depth issues. Junior Jason White, a 5-10, 205-pounder, has carried the ball just three times this season, and freshman De'Andre Johnson, a 5-8, 200-pounder from Miami, has just 18 rushes for 79 yards in a very limited role this season. Brad Rogers, Jordan Canzeri and Damon Bullock also could get touches as they've received a similar number of carries in bowl practices.

Quarterback James Vandenberg leads a sound passing attack featuring receiver Marvin McNutt, who caught 78 passes for 1,269 yards and 12 touchdowns this fall. And they'll be facing an Oklahoma defense that ranks 83rd nationally against the pass. However, the Sooners' secondary will be greatly helped if the Hawkeyes can't run effectively and are deemed one-dimensional. OU also is one of the best pass-rushing teams in the nation, recording 37 sacks. And Vandenberg hasn't been great away from Kinnick Stadium this season.

Keep an eye on: The "Bell Dozer" formation. Bell has scored 10 touchdowns on just 31 rushing attempts in the last five games, and he's been crucial in short-yardage and goal-line situations, especially with Whaley out.