The Iowa Hawkeyes may have seen their once-loaded backfield take a serious hit from a suspension and transfers, but help is on the way.

Just not quite in time for the team’s Insight Bowl matchup with Missouri. 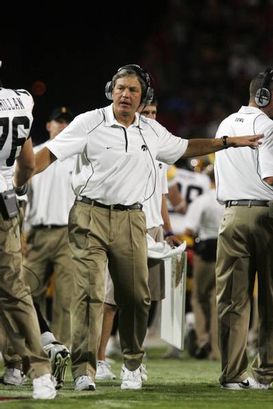 But fans should be excited for the arrival of Rodney Coe in 2011. The 6-3, 230-pounder, who recruiting analyst Tom Lemming ranks as the top prospect in the state of Illinois' senior class, made a verbal commitment to the Hawkeyes on Sunday. He chose Iowa over Kansas, Kansas State, Arkansas and Illinois. The Edwardsville, Ill., native could be just the right tonic for the Iowa program with all of the negativity surrounding it the last few weeks.

“Iowa runs the football. That's exactly what I'm about," Coe told Hawkeye Insider.com. "I want the rock in my hands."

There was also a report that Iowa received a verbal commitment from running back Mika'il McCall over the weekend. But the Dolton, Ill., native has denied that story. McCall had previously committed to Michigan State.

It was imperative that Iowa land at least one or two running back recruits for the 2011 class with the lack of depth in the backfield. Former running back recruit Melvin Gordon from Kenosha, Wis., recently backed out of his commitment and will attend Wisconsin.

Of course, head coach Kirk Ferentz suspended starting running back Adam Robinson for the Insight Bowl and Jewel Hampton is transferring from the program. Brandon Wegher, who had an Iowa freshman-record eight rushing touchdowns last season, requested his transfer on December 10.

Freshman running back Marcus Coker will start the bowl game, but some question whether Coker can be a productive long-term option in case Robinson doesn't return.