Spring practice kicks off in Iowa City on Wednesday as Iowa breaks in new coordinators on both sides of the ball.

Let's take a look at some of the storylines that will play out over 15 practices as the Hawkeyes prepare for their concluding scrimmage on Saturday, April 14.

One of the most-used words to describe the Iowa program under Kirk Ferentz has been "continuity," particularly regarding his staff. But the Hawkeyes head coach will have new coordinators on both sides of the ball, as Greg Davis will lead the offense with Ken O'Keefe leaving for the NFL's Miami Dolphins, while Phil Parker takes over for the retiring Norm Parker (no relation). It will be the first time the Hawkeyes enter the spring with two new coordinators since the head coach's arrival in Iowa City. But many Hawkeye fans believe that a shakeup was just what this team needed after experiencing back-to-back .500 finishes in Big Ten play. And at his presser Tuesday in advance of spring practice, Ferentz said the new additions will make things "fun" and "invigorating." The open scrimmage on April 14 at Kinnick Stadium will give Ferentz a chance to see how both sides of the ball look under their new leaders. 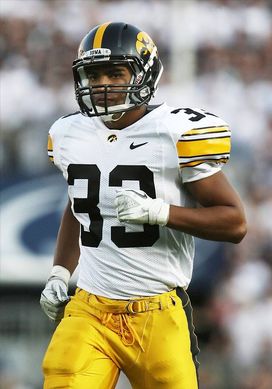 ICONWill Jordan Canzeri emerge as a No. 1 RB, or will the Hawkeyes look to a committee to replace Marcus Coker?

With the Big Ten's second-leading rusher, Marcus Coker, transferring to Stony Brook, the Hawkeyes will need to replace the RB's 1,384 yards and 15 touchdowns on the ground. Will one lead back emerge from the pack? It's possible. But as has been the case under Ferentz, there won't be a shortage of backs willing and ready to at least try to run with the starting job. This spring, Jordan Canzeri, Damon Bullock, De'Andre Johnson, Jason White, Brad Rogers and Barkley Hill will compete for positioning on the depth chart entering summer and fall. Class of 2012 RB Greg Garmon joins the team this summer. While Ferentz would ideally love to be able to lean on one particular rusher, the bright side is that each player will have a chance to earn carries. And competition is always healthy. The question is whether enough capable backs can emerge to at least give the Hawkeyes some semblance of Big Ten-quality depth, especially against the league's better run defenses. A "running back by committee" will obviously only work when there are capable backs contributing to the cause. It will be interesting to see if new OC Greg Davis relies on quarterback James Vandenberg in the short-passing game to serve as a de facto run game, at least early in the season. Davis worked well with different types of quarterbacks and running backs in Austin, so his play-calling is versatile.

Are there enough offensive weapons?

With Coker gone and the run game a little bit of a concern, Hawkeye fans can't forget that one of the best receivers in school history, Marvin McNutt, has departed as well. So Vandenberg will be looking to establish rapport with some new weapons. Keenan Davis could be ready to emerge as the new No. 1 receiver because he has good size and showed potential last season. But he struggled with dropped passes. Kevonte Martin-Manley was solid in the slot early in the year but seemed to go AWOL. Tight end C.J. Fiedorowicz could be a bit of an X-factor in this offense. I expect Davis to really utilize Fiedorowicz, perhaps giving the Hawkeyes production at the position that they were used to when the likes of Allen Reisner and Tony Moeaki were on campus.

Defensive linemen Dominic Alvis and Carl Davis are out for spring drills. Alvis tore his ACL last season while Davis is battling a knee issue that was fixed in January. Because of their absences, Iowa will have to deal with having one of the youngest defensive lines in the country this spring. Redshirt freshmen Dean Tsopanides and Riley McMinn are currently listed as the starting ends on the pre-spring depth chart, while redshirt freshman Darian Cooper will fill in at one of the tackle spots until Alvis returns to health. Senior Steve Bigach will likely start at the other tackle position.