Is Alabama's defense in for a down year?

The defensive talent that defending BCS national champion Alabama lost to the National Football League in this past April's draft has been well-documented.

Strong safety Mark Barron, cornerback Dre Kirkpatrick, inside linebacker Dont'a Hightower, outside linebacker Courtney Upshaw, defensive tackle Josh Chapman and cornerback DeQuan Menzie were all drafted by NFL teams, which means that Crimson Tide head coach Nick Saban and defensive coordinator Kirby Smart have had their work cut out for them this offseason determining which pieces will fit best as replacements for those stars. 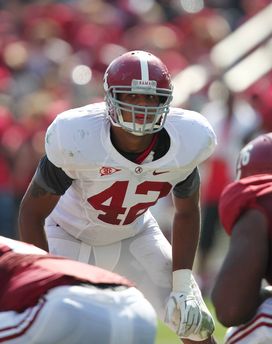 US PRESSWIREAdrian Hubbard will see his role greatly expand this season in Alabama's defense.

Losing all three starters, particularly Hightower and Upshaw, obviously weakened the linebacker corps. Even Jerrell Harris was a two-year starter. But keep in mind that Saban never rebuilds, particularly on defense. He simply reloads. And the Tide have plenty of options to fill in both on the inside and outside, including veterans Nico Johnson and C.J. Mosley as well as sophomores Xzavier Dickson, Trey DePriest and Adrian Hubbard. Junior Jonathan Atchison, sophomore Anthony Orr and freshmen Ryan Anderson, Dillon Lee and Denzel Devall will also compete for time at outside 'backer.

No matter who lines up as the starters in the season opener against Michigan, Saban will put his best combination on the field no matter if they are listed as inside or outside 'backers on the depth chart. In the complex defensive system run in Tuscaloosa, the spots are often interchangeable.

However, replacing Upshaw at the Jack position will be tough for Dickson, who was a reserve last year. But DePriest was a very good special teams player who received snaps in the second half of 2011. And Hubbard's intriguing combination of size and athleticism at the Sam spot will be fun to watch. The question is whether the production on the outside will show up on the stat sheet in terms of sacks and quarterback hurries, especially on third down.

The secondary also was hit hard by graduation and the draft, as the team lost three-quarters of its starting defensive backfield. And while the Tide will continue to run their base 3-4, you'll often see five or six defensive backs on the field. So good depth is necessary to succeed.

Good thing for 'Bama fans that the Tide have it.

Safety Robert Lester is the most experienced defender of the bunch, and his 10 career interceptions reveal his playmaking ability and his top coverage skills. Fellow safety Vinnie Sunseri is best against the run but has improved his coverage skills. And then there's Ha'Sean Clinton-Dix, whose coverage skills will be valued in nickel and dime situations. Nick Perry will also be in the mix after playing in six games as a true freshman.

Corner DeMarcus Milliner, meanwhile, could go down as one of the best Tide corners ever. He's a shutdown defender who is skilled against the run while sometimes playing like a safety. Speedy Deion Belue had a strong spring and should start opposite Milliner to give 'Bama a strong secondary despite its personnel losses. John Fulton also remains in the mix and should be a valuable contributor.

Of course, the Tide will make some mistakes in the defensive backfield, as to be expected. The hope is that the improvement is rapid and that breakdowns don't affect the defense as it did back in 2010 when it was coming off of its national title win over Texas. A strong pass rush is also a secondary's best friend. It may come down to the outside linebackers for that because no returning defensive lineman had more than one sack in 2011.

The 2010 defense was very good, but nothing like last year's. While this year's unit may be a bit unproven, we'll start to find out a lot September 1 in Arlington against the Wolverines whether it is strong enough to repeat as national champs.