Is Kiffin taking advantage of a recruiting loophole at USC?

Is it surprising that USC is compiling a top-10 — and potentially a top-5 — Class of 2011 after an 8-5 season and another bowl-less campaign on the horizon?

Not really, as head coach Lane Kiffin is merely taking advantage of the appeals process as the school fights sanctions that would limit its signing classes to 15 for 2011 through 2013. Until the NCAA makes a ruling on the Trojans’ appeal, the sanctions will be kept on hold. The school also is fighting the back half of the two-year bowl ban.

ICONAs USC awaits word on its appeal, Lane Kiffin is doing his best to bring in the nation's best talent.

A final decision from the NCAA’s Infractions Appeals Committee is not expected until February or March.

Which means that Kiffin is on the hunt for several of the nation’s top prospects, and the former Tennessee head coach has already snagged some of the best available talent in what he has described as “the most important class ever signed at USC because of the situation surrounding it.”

Out of the school’s current 25 commits, nine players have already enrolled early in January. Quarterbacks Max Wittek and Cody Kessler were big “gets” for Kiffin, as well as addressing the lack of depth at offensive line. The class also could include multipurpose threat De'Anthony Thomas and receiver George Farmer, perhaps the nation's top receiver.

Of course, real drama could unfold on National Signing Day if players who have made commitments give in to final sales pitches from other major programs.

But for now, the situation at ‘SC doesn’t appear so bleak.

So what happened to the program being handcuffed? Is Kiffin taking advantage of a loophole?

Well, it depends on how you look at it.

USC is abiding by all NCAA rules and regulations as the appeals process plays out. If the sanctions are upheld, the appeals committee would determine when the penalty would officially go into effect, which means the NCAA could make the school's recent scholarship offers ineffective. However, the USC program likely is banking on the fact that the NCAA wouldn’t put nearly a dozen players — who would have already committed — in danger of losing their scholarships. 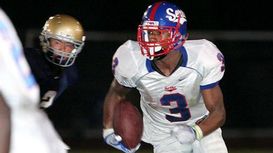 WR George Farmer is already enrolled and will be a part of spring practice.

In a win-now and what-have-you-done-for-me-lately era of coaching, having these penalties possibly deferred may be the best — and only — option for Kiffin and the Trojans.

As it stands, by the time fall camp opens, it’s conceivable that USC might have 30 more players than it did at the end of last season.

What about the new FBS rule that caps at 28 the number of players a school can sign to letters of intent during the signing period? Well, it technically wouldn’t apply to USC because its early enrollees count against the 2010 class, which included 14 players.

So, Kiffin is sitting pretty even if penalties severely hamper the program starting in 2012, right?

Well, if the 'SC staff hit on nearly every recruit this season, maybe the future is brighter than most first had imagined.

But we all know how inexact of a science recruiting can be.