Is Oregon's Thomas ready for his next SEC test?

Let’s take a step back from monitoring the NCAA’s investigation into Oregon’s football program and shift the focus back to the Ducks’ on-the-field prospects this fall. Because no matter what happens in the Willie Lyles fiasco, Oregon must prepare for its highly anticipated nonconference showdown with LSU on September 3 at Cowboys Stadium in Arlington, Texas.

Quite frankly, it’s the biggest season-opener in the Pac-12 program’s history

And the spotlight will shine the brightest on quarterback Darron Thomas, who will begin preparations for his second full season as the starter when fall camp begins August 8.

The last time we saw the dual-threat signal-caller, he was being constantly harassed by an Auburn defensive line led by tackle Nick Fairley in the BCS title game. In what was a rare occurrence in 2010, the Ducks’ spread-option game did not click against the Tigers, with Thomas looking hesitant and often struggling to decipher his zone reads.

Doak Walker Award-winning running back LaMichael James was stifled, picking up just 49 yards on 13 carries. The offensive line was overmatched and overwhelmed. And Thomas looked too much like a first-year starter at key moments in the contest. 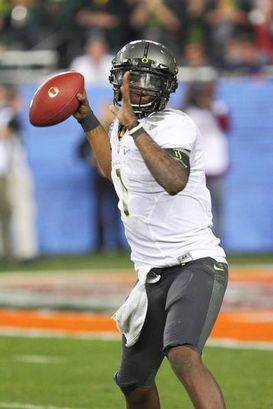 ICONDarron Thomas and the Ducks will face another tough SEC test in the season opener.

Oregon’s offense, which led the nation in scoring at 49.3 points per game, averaged 537.5 yards per game — including over 300 yards on the ground — and operated within a fast-paced tempo, never generated a consistent ground game due to the presence of Fairley, the Lombardi Award winner, and speedy linebacker Josh Bynes.

But the most surprising aspect of the loss to Auburn was head coach Chip Kelly’s reluctance to employ more misdirection plays to make the Tigers’ front four move east to west more often.

Where were the screens to try to keep the defense off balance? Why didn’t Kelly try to put James and Kenjon Barner into positions to get the ball on the outside and challenge Tigers defensive ends Antoine Carter and Nosa Eguae to stay disciplined in their assignments?

We’ll find out immediately this fall if Kelly’s game plan for a tough SEC front seven has changed, as LSU — despite the losses of standout defenders Drake Nevis, Kelvin Sheppard and Patrick Peterson — annually fields one of the best defenses in the nation under coordinator John Chavis. And while the Tigers will try to replace defensive tackles Nevis and Pep Levingston with a combination of players, early enrollee Anthony Johnson’s nickname isn’t “Freak” for nothing.

Still, it helps that the 6-3, 212-pound Thomas and the Ducks won’t have to deal with Fairley, who was a first-round selection of the Detroit Lions in this past April’s draft.

Of great concern, however, is the inexperience the Ducks will have on the offensive line — a unit that struggled in the title game even after having a stellar regular season. The team is replacing three starters on the unit, which looms even more important than replacing clutch receiver Jeff Maehl and solid contributors on defense such as Kenny Rowe and Casey Matthews.

After the loss in the title game, Kelly admitted in the postgame presser that the biggest reason the Ducks fell was because of the matchup up front. This season, the Oregon offensive line remains the biggest issue as it attempts to reach a third straight BCS game. The need to run the ball effectively to sustain drives is crucial for any team. But for a squad like the Ducks, whose offense is built around productivity on the ground, it’s imperative.

Against Auburn, Oregon ran just 11 plays from scrimmage in the second quarter. The Tigers, meanwhile, ran 36 plays. And ultimately, Auburn’s defense never tired, which was a rare occurrence for a Ducks opponent in 2010 and one of the biggest reason’s for the success of the offense. The fact that Thomas threw for 363 yards in the title game underscores just how out-of-sorts the offensive unit was last January.

Against the SEC’s other Tigers in early September, will that once again be the case?

Darron Thomas had a breakout campaign in his first year as a starter. When the Oregon offense is clicking, it's unstoppable. Check out Thomas' 2010 highlights below.