Is Seastrunk on his way out of Eugene?

The Oregon football player at the center of the NCAA’s investigation concerning the program’s relationship with Willie Lyles could be on his way out of Eugene. 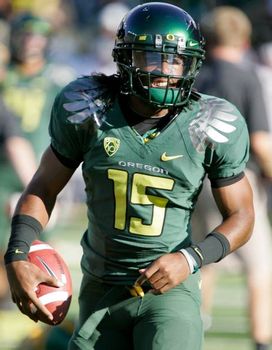 Running back Lache Seastrunk, whose mentor Lyles received $25,000 from the school for his “recruiting services,” is filing paperwork today in preparation of a transfer, according to David Smoak of ESPN-Central Texas. According to Smoak, Seastrunk may end up at Baylor playing for Art Briles.

Justin Hopkins of 24/7Sports.com confirmed the report, stating that Seastrunk “has been granted his release paperwork.”

The 5-9, 190-pound former five-star recruit was one of the highest-rated players to sign with Oregon in the program’s history. He was supposed to fit well into the team’s spread offense because of his speed, but it looks as if he will fall well short of expectations.

Seastrunk was already behind Heisman Trophy candidate LaMichael James and talented backup Kenjon Barner on the depth chart. However, true freshman DeAnthony Thomas has started to emerge as a strong candidate to steal carries from Seastrunk. And power back Tra Carson gives head coach Chip Kelly a different look from the backfield.

Lyles told Yahoo! Sports in July that Oregon paid him for the influence he held over high-profile recruits, one of which was Seastrunk.