Is Spaziani in trouble at Boston College?

BC, which had made a bowl appearance for 12 straight years, will suffer its first losing season since 1998 as it was officially eliminated from bowl contention. 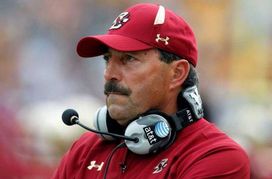 Frank Spaziani and the Eagles are 2-7 and will miss the postseason.

Against the Seminoles, the Eagles recorded just 207 total yards, converted just 33 percent on third down and committed 4 turnovers. It was yet another sloppy performance in a year of disappointments for BC.

While injuries and youth at key positions have contributed to a rough 2011 season, Spaziani's program has certainly taken a step back in his third year on the job. While his record stands at 18-17 at BC, the two bowl games he led his team to in his first two seasons ended in losses -- the Emerald Bowl in 2009 and the Kraft Fight Hunger Bowl last season.

Spaziani represents BC so well because he's seen the team go through head-coaching changes while he has served as defensive coordinator, so he knows what it takes to win in Chestnut Hill. But the ACC certainly is a league that provides an opportunity for even average teams to go bowling. Injuries and youth can set a team back, but they can't be used as excuses for a down year.

Stud linebacker Luke Kuechly gives fans a reason to watch the Eagles play, but the offensively challenged squad must be able to move the football consistently to change its fortunes. The loss of Montel Harris set back the running game, but quarterback Chase Rettig's accuracy and 1:1 touchdown-to-interception ratio must improve in order for BC to bounce back in 2012.

Spaziani should get his chance to turn around the team's fortunes next fall, but he'll certainly enter the season on a warmer coaching seat than when he arrived for preseason camp this year.