Johnson tries to regain mojo at the Combine

Jerrod Johnson is Texas A&M’s career leader in total offense (8,888 yards) and passing yards (8,011 yards). But coming into this year’s NFL Combine, there may not be another quarterback in Indianapolis who has more to prove to league scouts than the former Aggies quarterback. 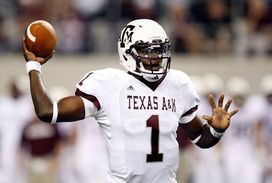 Jerrod Johnson hopes to prove to scouts that he is fully healthy after a rough 2010.

The 6-5, 245-pounder has his chance on Sunday to regain some of the hype he had entering the 2010 season when the one-time preseason Heisman Trophy contender joins his fellow quarterbacks in throwing at Lucas Oil Stadium.

Considered one of the best quarterbacks in the nation after a stellar junior season, which included a nationally televised showcase against Texas where he threw for 342 yards and four touchdowns, Johnson was benched by head coach Mike Sherman last season after the Aggies failed to live up to preseason expectations. Ryan Tannehill took over and led the team to a berth in the Cotton Bowl. Meanwhile, Johnson remained on the sideline, and some wonder whether he’ll even be a late-round pick in April.

Sherman, who has coached the likes of Brett Favre and Aaron Rodgers, believes that Johnson’s knowledge of the game and his dedication to watching film will make him a productive player at the next level. But more importantly, the fact that his throwing shoulder -- which was repaired during surgery last offseason -- will be fully healthy again should allow Johnson to display his true skill set.

Even before the 2010 season began, Johnson felt that his arm strength wasn’t the same. He didn’t have the same zip on the ball, and he threw nine interceptions during a three-game losing streak before finally being benched against Texas Tech in late October. And he never saw the field again.

This offseason, Johnson has been working on his mechanics with former NFL quarterback Zeke Bratkowski, who worked with Tim Tebow before the draft last year. Tebow had major concerns coming out of Florida because of the system he played in and the fact that many wondered if he would be able to make all the throws necessary to be successful in the league.

With a strong day on Sunday and another solid showcase at his pro day, Johnson could prove that 2010 was an abberation and that the Heisman buzz he once generated was warranted.