Steinberg tweeted on Monday afternoon that Jones felt he had accomplished his mission to turn around the program and that he needed a break. SMU confirmed Jones' resignation. 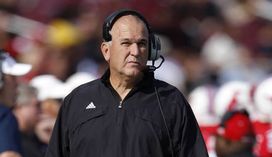 US PRESSWIREJune Jones has resigned from SMU.

Defensive coordinator Tom Mason will take over on an interim basis and will make his debut a week from Saturday at home against Texas A&M.

"June's decision to resign was his own, and we thank him for his efforts and wish him the best," AD Rick Hart said in a release. "As we embark upon the process of identifying our next head football coach, we are positioned to attract quality candidates due to the progress our program has made under June's leadership."

Jones, who took Hawaii to the Sugar Bowl in 2007, began his seventh season in Dallas with a 45-0 loss to Baylor and a 43-6 setback to North Texas. But he took the Mustangs to four consecutive bowl games after his 1-11 debut campaign and had built the program back to being a respectable product.

It would be a real surprise if the Mustangs hire a veteran coach to replace Jones, so a few names to consider: Ohio State OC Tom Herman, Baylor OC Philip Montgomery and Texas A&M OC Jake Spavital. This is an attractive non-Power Five job because the program offers good resources in a major city. I'd expect the Mustangs to hire a young coach with strong Texas high school ties.