Yeah, that seems about right. 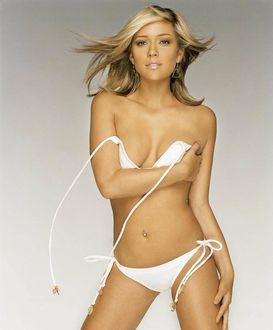 The former reality star celebrated her 24th birthday at a bash hosted by The Bank nightclub at the Bellagio hotel in Sin City on Saturday night.

Outfitted in a short, gold strapless dress and black heels, K-Cav partied deep into the night with a group of friends, getting VIP treatment at a private table.

The blonde knockout, who turned 24 on January 5, posed with a two-tiered orange and white birthday cake, puffed on cigarettes and enjoyed multiple shots and cocktails throughout the evening.

Perhaps feeling a tad guilty Sunday morning, K-Cav composed the following tweet, “I love JC will all my ♥”

Later in the day, with J-Cut and the Bears victorious and moving onto the NFC Championship game against Green Bay, she added, “Yaaaaaa that's my boyfriend!!!! Woot woot.”

Cavallari reportedly has a handful of new projects in the works after finishing on The Hills last year, including producing three new reality TV projects.

For complete pics of K-Cav partying hard, check out the Daily Mail.