Notre Dame announced via a press release Tuesday that the school has exercised an option in Brian Kelly’s original contract, extending the head coach's deal by two years through the 2016 season.

It is unknown whether Kelly, who just finished his second season in South Bend, received a raise in the extension as well. 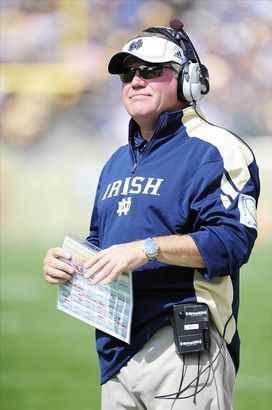 “While Coach Kelly and I are focused on the additional work that must be done to reach our goals, I am very pleased with the progress we have made during the past two years,” athletic director Jack Swarbrick said in a statement. “Our football team’s performance on the field, in the classroom, and in the community reflect Coach Kelly’s commitment to building a program that will be able to sustain success in the long run, and to doing so in a manner consistent with Notre Dame’s values and tradition.”

Kelly has led the Fighting Irish to 8-5 campaigns in his first two seasons in South Bend.

“I want to thank Father Jenkins and Jack Swarbrick for their unwavering support of me the last two years,” Kelly said. “My family and I are truly blessed to be at Notre Dame and we are excited about what the future holds for the Fighting Irish football team. I also want to thank Father John and Jack for the commitment they made to the football program last week by renewing the contracts of our assistant coaches. I think we have one of the finest coaching staffs in the country at Notre Dame, and the confidence our administration has shown in us is truly appreciated.”

The move ensures that Kelly is under contract through the next full recruiting cycle.

The former Central Michigan and Cincinnati head coach lost three assistants after this past season ended, but the school announced that the remaining staff members received two-year contract renewals.