Kentucky at Louisville: 3 things to watch

Opening weekend of the 2012 college football season continues on Sunday afternoon as Kentucky and Louisville meet in their annual in-state rivalry.

Joker Phillips enters the season on the hot seat for the Wildcats, while Charlie Strong continues to build the Cardinals into a Big East contender.

Let's take a look at three things to watch in the clash between the Wildcats and the Cardinals for the Governor's Cup.

1. Bridgewater's maturation: Teddy Bridgewater had his coming-out party last season against the Wildcats when starter Will Stein was injured. Coming into the game off the bench, the dual-threat signal-caller threw for two touchdowns in the road victory and began what would be a Big East rookie of the year campaign. He finished the season with over 2,100 passing yards and 14 touchdowns on nearly 65 percent passing. The Cardinals tied for the Big East title and reached the Belk Bowl, where they fell to N.C. State. There are high expectations this fall for Bridgewater, who was a key piece to the program's 2011 class after once being a Miami commit. He'll need better pass protection from his offensive line, however, as well as production on the ground. Strong has not yet said who will be the No. 1 tailback. Juniors Dominique Brown, Jeremy Wright and Senorise Perry are all in the mix. But all eyes will be on Bridgewater, who must continue to develop his all-around game if the Cardinals have designs on winning the league. 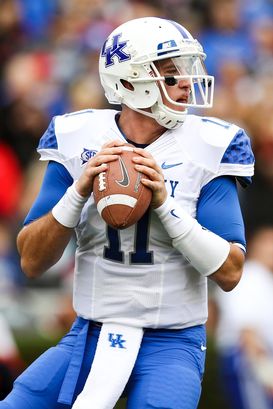 US PRESSWIREMaxwell Smith won the starting QB job over Morgan Newton at Kentucky.

2. The lead Wildcat: Phillips has turned the offense over to sophomore Maxwell Smith, who looked good at quarterback late last season and took advantage of Morgan Newton being sidelined this spring. This was a putrid offense in 2011, and Phillips is looking for playmakers to emerge. He is optimistic that the emergence of receivers Demarco Robinson and Daryl Collins can carry over to the season, but the Wildcats need to be strong along the offensive line. Senior running back CoShik Williams must help out Smith on the ground, as well, against a defense that ranked 10th against the run in 2011. Offensive coordinator and quarterbacks coach Randy Sanders believes Smith's hard work this offseason will pay off after completing 57.4 percent of his passes in his final four games of the season. In those contests, he threw for 769 yards and four touchdowns against two interceptions, both of which came against Georgia. He'll have to be on top of his game against a Louisville defense that continues to get better, led by all-conference junior safety Hakeem Smith.

3. Limiting mistakes: Keep an eye on two areas of potential weakness for both teams. For the Cardinals, good special teams play will be needed with Strong starting true freshman Josh Appleby at punter and redshirt freshman John Wallace or sophomore Matthew Nakatani at kicker. Games, as we all know, can turn on special teams. And issues in the kicking game get magnified in tight contests. Meanwhile, it will be awfully difficult for the 'Cats to replace do-everything defender Danny Trevathan. This is a team that could be susceptible at linebacker and in the secondary. Kentucky wants to be more physical on defense, and the strength is up front with tackles Mister Cobble and Donte Rumph and end Collins Ukwu.