When Gunner Kiel, the top-rated pro-style quarterback in the Class of 2012, committed to LSU over Notre Dame and Vanderbilt late last month, Brian Kelly and the Fighting Irish were certainly disappointed to lose out on the services of the Indianapolis Star’s Indiana Mr. Football.

The 6-4, 215-pounder, who graduated early from Columbus East High School, wanted to enroll early at his school of choice and compete in spring drills to have chance to make a strong impression on the coaching staff at LSU.

For the Fighting Irish, the focus turned to finding a quarterback replacement by the time National Signing Day rolled around on February 1. And the top backup plan was Northern Valley Regional High School (Old Tappan, N.J.) star Devin Fuller, a dual-threat signal-caller who was still weighing his options.

However, as is often the case when it comes to recruiting in college football, things change very quickly.

With Kiel officially changing his mind and ending up in South Bend after all, the Irish are no longer in desperate need of a signal-caller in the Class of 2012. 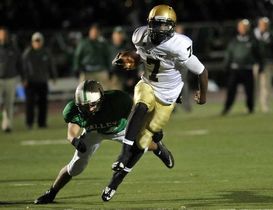 With Gunner Kiel enrolled at Notre Dame, Devin Fuller may be looking elsewhere.

So what does that mean for Fuller?

The 6-1, 190-pound four-star recruit has likely recognized that the Irish are no longer the best option for him if he wants to see the field early, so making a final visit to South Bend despite the Irish aggressively pursuing him when the staff thought Kiel was still headed to Baton Rouge isn't in his best interest. While Fuller's father, Bart, said Tuesday that his son had not eliminated Notre Dame from his list of schools despite the arrival of Kiel, it's hard to imagine that the quarterback's attention has not turned elsewhere. And keep in mind that the Irish originally recruited him as a defensive back, a position he doesn't desire to play at the next level.

This past weekend, the New Jersey native visited UCLA, where he discussed how he would be used in the team’s offense under new head coach Jim L. Mora and also was able to get a more thorough breakdown of the school’s academic programs.

Fuller is scheduled to visit with Greg Schiano and hometown Rutgers on Friday, and he has already made a trip to Lincoln to visit with Bo Pelini and the Nebraska staff as well as Gary Patterson at TCU.

Besides Notre Dame, his last visit has come down to Arizona and Baylor, where he would be able to play in the spread offenses of Rich Rodriguez or Art Briles, who oversaw Robert Griffin III’s Heisman Trophy-winning season. His final visit will come on the weekend of January 28-29.

So which program has the advantage for the services of Fuller, who completed 127 of 195 passes for 2,247 yards and 20 touchdowns while rushing for 1,326 yards and 17 more scores during his senior season?

If family is going to play a role, then the Bruins and Scarlet Knights are well-positioned. Of course, Fuller and his immediate family live in New Jersey, but the quarterback has an aunt and cousins who live in California not too far from Westwood.

In terms of the two rosters and playing possibilities, UCLA may have the edge because Mora and his offensive staff currently do not have a quarterback in the fold for the Class of 2012. Despite the fact that Brett Hundley is considered the future at the position after being brought in as an early enrollee last winter, depth remains an issue at the position for the Bruins. And there is no telling how fast Hundley will develop.

Most importantly, Fuller's decision will come down to his comfort level with the offense, as well as the coaches and the players. But certainly, although Fuller may not have officially eliminated the Irish from the process, the arrival of Kiel likely has the dual-threat QB who is often compared to former West Virginia star Pat White looking elsewhere.