“This is a very, very severe punishment, but it was imperative to make a strong message, especially to our first group of freshmen our first year here, and potentially the most talented player on the team, that we have high standards for our players on and off the field,” Kiffin said. 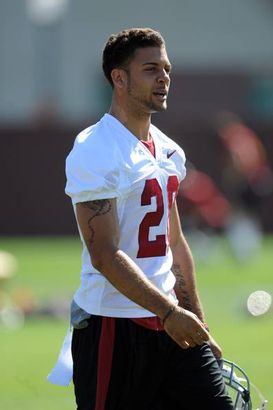 Baxter was told of the decision Wednesday morning. He will continue to participate in practices in preparation for making his USC debut at home Sept. 11 against Virginia.

Kiffin would not specify what team rules Baxter had broken, and the freshman was not allowed to speak to reporters after Wednesday's practice.

A source close to the Los Angeles Times said Baxter was the unnamed individual cited in a USC Department of Public Safety incident report for "violating a team curfew" and "being under the influence of a controlled substance" that was filed at 2:47 a.m. Tuesday.

The source said officers smelled marijuana in the dormitory.

On Tuesday, Baxter and freshman wide receiver Markeith Ambles could be seen running along the sideline during the morning practice as punishment for what Kiffin had said was being “late for something.” Baxter, however, continued to perform the drills during evening practice while Ambles was able to return to practice.

Kiffin said he's still trying to decide whether or not Baxter will make the trip with the team to Hawaii.

Baxter enrolled at USC in January after graduating a semester early from Mission Bay High School in San Diego. He will get reps at tailback and as a returner this season after a strong spring practice season.