Kiffin's Class of 2009 depleting at Tennessee

Tennessee fans really don’t like Lane Kiffin. And they may like him even less if the program faces sanctions — even if they are minimal — stemming from an investigation surrounding the since-disbanded Orange Pride program.

But the one aspect of Kiffin’s tenure in Knoxville that has been overlooked is how his lone recruiting class has fared. 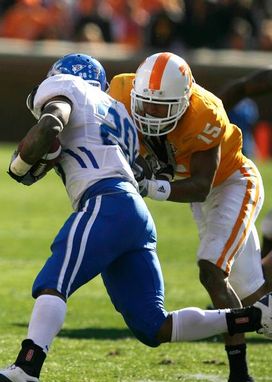 And with the withdrawal of safety Janzen Jackson from school earlier this week for personal issues, that class has really thinned out over the past two years.

Perhaps the team’s best player, Jackson is yet another top recruit from the 2009 signing class that is no longer with the team (he could return in the fall, but he would need an NCAA waiver). That class, of course, was ranked by many recruiting services as a top-10 haul.

Six of the top players from that year will not be on the practice field this spring when Derek Dooley begins preparations for his second season in Knoxville.

This week, linebacker Jerod Askew was dismissed from the team for violating team rules, and he was one of Kiffin’s top recruits.

Receiver Nu’Keese Richardson and safety Darren Myles were both kicked off the team following their freshman seasons after being arrested in separate incidents. Running back Bryce Brown also left Knoxville after his first year and transferred to Kansas State to play with his brother. And just last month, running back David Oku announced that he planned to transfer after playing the past two seasons.

In addition, cornerback Mike Edwards was dismissed following his freshman season after getting arrested, while receiver James Green did not qualify academically and never made it to Knoxville.

Keep in mind that when Kiffin bolted to USC he said he left the Tennessee program in better shape than when he arrived.