Washington State began spring practice on Thursday in preparation for its spring game on April 20.

Let's take a look at some of the key storylines that will play out in Pullman this spring as the Cougars look to improve on a 3-9 mark in Mike Leach's first season. 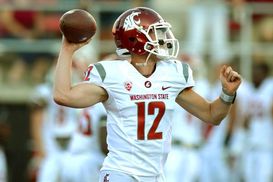 The battle at quarterback: Junior Connor Halliday in all likelihood will start the season opener for Wazzu after he tossed 15 touchdown passes in part-time duty last fall. But Leach is very high on redshirt freshman Austin Apodaca. So there's no question that Halliday can't take it easy this spring, through the summer and in preseason camp. Leach will also have a few higher-profile recruits joining the competition in preseason camp, but it's a two-horse race right now with Halliday holding the advantage. And whoever ultimately wins the job will work behind an offensive line that returns a lot of experience. However, Wazzu finished last in the nation in sacks allowed with 57 last fall.

The defense should be improved: While Leach remains an offensive coach, even he knows that the Cougars cannot earn a bowl berth without significant improvement on the defensive side of the ball. The good news is that eight starters return to a unit that allowed 425 yards per game, which ranked No. 83 in the nation. However, Wazzu was one of the better squads in sacks recorded and tackles for loss. The front four may be lacking depth, but the back seven is the strength of the defense. It will be interesting to see if junior college linebackers Ivan McLennan and Lyman Faoliu can pick up the system and play immediately. The loss of outside linebacker Travis Long is tough because he was a four-year starter who recorded 20.5 career sacks and 42 tackles for loss. Junior Logan Mayes will try to fill the void after recording 2.5 sacks and four quarterback hurries last season in limited action.

Being grounded: We know that Leach's teams will primarily rely on the passing game, but the Cougars need some semblance of a running game to keep defenses honest. Last year Wazzu averaged under 30 yards per game on the ground. Part of that had to do with poor run-blocking, but a lead back must emerge. Teondray Caldwell showed potential as a freshman, averaging 4.8 yards per carry. He only carried the ball 56 times but did miss three games and was banged-up in others. He is positioned to be the lead guy in 2013, but Leach has depth in the backfield as well. But will the Cougars commit to establishing the run more often?

Leach said he is excited to see how freshman receiver Robert Lewis looks in spring. Lewis lined up everywhere on the field in high school and could do the same in Pullman as well as help in the return game.