It really is the most wonderful time of the year.

A look at the five matchups on Saturday that will kick off the 2014-15 postseason.

New Orleans Bowl (New Orleans): Louisiana-Lafayette vs. Nevada at 11:00 am ET on ESPN 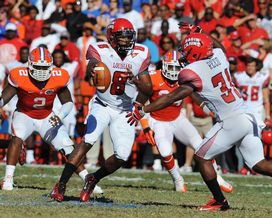 US PRESSWIRELouisiana-Lafayette and Terrance Broadway will help kick off the 2014-15 postseason.

This game used to take place at night, but now the contest kicks off the first day of bowl action. Expect the crowd to be less rowdy, which is a shame, as the Ragin' Cajuns try for their fourth straight New Orleans Bowl win. This matchup features senior quarterbacks in Louisiana-Lafayette's Terrance Broadway and Nevada's Cody Fajardo, who are two of the more exciting dual-threat signal-callers we have seen the last few seasons. Both of these defenses will give up plenty of yards to each QB as well as to the deep stable of backs that the teams employ. The Ragin' Cajuns use beefy Alonzo Harris (737 rushing yards) and speedster Elijah McGuire (1,165 yards) along with Broadway, while Don Jackson and James Butler have combined for over 1,500 yards on the ground for the Wolf Pack.

These programs have only met twice in their history (1960 and 1961), so we get to see a fresh matchup in Albuquerque. The Aggies have seen the quarterback position get ravaged by injuries, so freshman Kent Myers has been leading the offense in the second half of the year. He has been solid and doesn't need to do too much because of the very strong Aggies defense. The Miners will try to run the ball against this 'D,' but how much success will they have against this unit? Aaron Jones and Nathan Jeffery have combined for over 1,700 yards and 16 touchdowns on the ground, and former Texas A&M quarterback Jameill Showers is a threat as well. The Miners will try to play ball-control offense, but they need to be successful on early downs because they will be in trouble if they face a lot of obvious third-down passing situations.

The Rams had a standout season, recording 10 wins for the first time since 2002. However, that strong record helped earn Jim McElwain the head gig at Florida, so offensive coordinator Dave Baldwin is the interim head coach. Will the players rally around Baldwin, or will they come out flat? Offensively, quarterback Garrett Grayson has put together a strong and efficient season (32 touchdowns against six interceptions), and he has weapons all around him. Receiver Rashard Higgins has 89 catches for 1,640 yards and 17 touchdowns, while Alabama transfer running back Dee Hart has rushed for over 1,250 yards and 16 scores. The Utes will have their hands full trying to contain the Rams' offensive attack, but Kyle Whittingham's defense is an aggressive and attacking unit led by ends Nate Orchard and Hunter Dimick.

It is really nice to see these two programs in the postseason after their disastrous 2013 campaigns. Troy Calhoun's Falcons played surprisingly very well on defense (especially against the run) after struggling mightily last year, and the Falcons notched wins over 'New Year's Six' entry Boise State and Colorado State this fall. Air Force's triple-option offense is still reliant on a ground game that is the nation’s eighth-best attack, but don't sleep on dual-threat signal-caller Kale Pearson (just three interceptions) and receiver Jalen Robinette (averaging over 18 yards per reception). Meanwhile, P.J. Fleck has become one of the hottest-rising Group of Five head coaches for the work he is doing in Kalamazoo with young players. One of those young players is running back Jarvion Franklin, who was a part of Fleck's outstanding 2014 recruiting haul and carried the football nearly 300 times this fall. He could be the key if the Broncos want to win their first bowl game in program history. Will he find running lanes against the Air Force front? He's part of an offense that averaged 34.6 points per game, which was best in the MAC. These two squads both improved by seven wins from last season, which tied TCU for the biggest increase in the FBS.

The Falcons have issues at quarterback, so we could see two signal-callers in this one. Sophomore James Knapke has struggled a bit, especially late, as he's completing just over 57 percent of his throws for 2,805 yards with 13 touchdowns and 12 interceptions. In his last three games, he has just one touchdown pass and has struggled with his accuracy. True freshman Cody Callaway actually replaced Knapke in the team's losses to Toledo and Northern Illinois, so head coach Dino Babers won't hesitate to make a change. Meanwhile, the Jaguars will be playing in their first bowl game, and we should expect to see a ton of support because it's an in-state game at the 25,000-seat Cramton Bowl. Their defense is solid, led by linebacker Theo Rich (eight sacks) and cornerback Montell Garner (10 passes defensed). However, the Jags struggle to move the football, which is why head coach Joey Jones has brought in former UAB offensive coordinator Bryant Vincent after the Blazers' program ended. Former OC Robert Matthews oversaw a unit that ranked ninth in the Sun Belt in scoring offense (22.1 points per game) and total offense (372.8 yards per game). Both teams struggled down the stretch, with Bowling Green falling in four of its last six contests and South Alabama losing four of its last five games.