The 2012-13 college football postseason continues Monday as Iowa State and Tulsa collide in the Liberty Bowl.

Let's take a glance at this matchup between the Cyclones and the Golden Hurricane.

Iowa State began the season with wins in four of its first five games, but the Cyclones stumbled to the finish line, losing five of their final seven contests. Still, head coach Paul Rhoads has to be happy with the play of freshman quarterback Sam Richardson, who assumed the starting job after he helped ISU to a 53-21 victory over Kansas after replacing Steele Jantz. Richardson threw seven touchdowns with no interceptions in the last two games of the season. 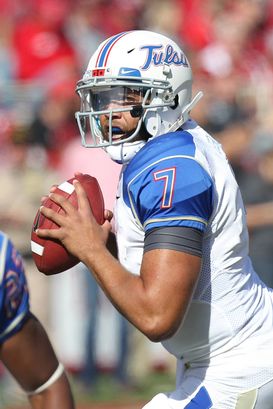 US PRESSWIRECody Green and the Golden Hurricane offense average over 240 rushing yards per game, which ranks 11th in the nation.

Tulsa, meanwhile, is coming off of its Conference USA title game win over Central Florida. The offense is led by Nebraska transfer quarterback Cody Green, who has tossed nine touchdowns in his last four games. He is the leader of a unit that has produced one of the strongest rushing attacks in the country. Alex Singleton has a school-record 41 career touchdowns, and he paces a Golden Hurricane offense that averages over 240 rushing yards per game, which ranks 11th in the nation. Trey Watts and Ja'Terian Douglas each recorded more than 750 rushing yards on the season, so there is serious depth in the backfield.

Tulsa will have revenge on its mind after falling to Iowa State in the season opener on September 1. The Cyclones scored 24 unanswered points in that one to record a 38-23 win in Ames. But Tulsa, which can tie a school record with its 11th win of the season, is a much better team now. The Golden Hurricane turned the ball over numerous times in the first meeting, and they will not have to go against all-Big 12 linebacker Jake Knott, who is recovering from shoulder surgery. Iowa State held the Golden Hurricane to just 160 rushing yards in this season's first meeting, but Tulsa should find more running lanes in this one. And in the first meeting, Green attempted 49 passes and threw two interceptions. He won't come close to airing it out that much in this game.