Let's take a look at some of the most important aspects of this matchup between the Chippewas and the Hilltoppers.

• The Antonio Andrews show: The Western Kentucky running back leads the nation with 2,997 all-purpose yards this season and is arguably the best player in the FBS who you may never have seen in action in 2012. The 6-foot, 211-pounder has the third-most all-purpose yards in NCAA history and could break the single-season record set by Barry Sanders (3,250) with 274 yards in this contest. Central Michigan ranks 99th in the country in rushing defense, so Andrews may find plenty of room on the ground, where he has racked up 1,609 yards and 11 touchdowns this year. 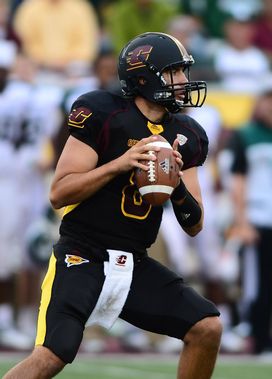 US PRESSWIRERyan Radcliff has a chance to become the 11th quarterback in MAC history to throw for 10,000 career yards.

• Veteran quarterback play: Central Michigan's Ryan Radcliff is a three-year starter at quarterback who put together his best season yet in his final collegiate campaign. He needs a 336-yard passing game to make him the 11th quarterback in MAC history to throw for 10,000 career yards. It isn't out of the realm of possibility, considering he threw for 383 yards against Western Michigan, 339 against Ball State and 337 against Toledo this fall. However, they were all losses. The key for the Chippewas will be having balance offensively, and that's where junior running back Zurlon Tipton comes in. Tipton rushed for 956 yards and 14 touchdowns during the second half of the season. Central Michigan would love for WKU to key on Tipton, which would give Radcliff the opportunity to test the Hilltoppers' secondary. Chippewas receiver Titus Davis averaged 20 yards per catch with eight touchdowns this fall, but he is suspended for the bowl game. Cody Wilson will now be Radcliff's top target. He is a possession receiver who leads the Chippewas with 64 receptions for 739 yards.

• A tale of two defenses: The Hilltoppers led the Sun Belt in total defense and rank 23rd nationally at 344.4 yards allowed per game. However, a season-ending injury to defensive end Quanterus Smith was a brutal blow. He led the nation in sacks before tearing his ACL. Consequently, the Hilltoppers' pass rush struggled late in the year without him. But first-team all-Sun Belt selection Andrew Jackson did lead the conference in tackles, while safety Jonathan Dowling led the league in interceptions with six. So Radcliff and Co. will face a stiff test. Meanwhile, the Hilltoppers will have to be aware of Chippewas sophomore linebacker Justin Cherocci, who recorded 124 tackles this fall. But this is a defense that allowed more than 440 yards and 33 points per game, including 40 or more points in five of its six losses. So Andrews, quarterback Kawaun Jakes and tight end Jack Doyle could present too much firepower for Central Michigan to prevent the Hilltoppers from recording their first bowl victory in program history. However, Jakes can be mistake-prone, as he tossed eight interceptions in his final six games, including three against FAU. And the Hilltoppers are minus-1 in turnover margin.

• Intangibles: While Bobby Petrino is set to take over the WKU program after Willie Taggart decided to move onto South Florida, Petrino will not be coaching this bowl game. Instead, Lance Guidry will be the Hilltoppers interim coach. He has been in this position before, too, as he took over the Miami (OH) program when Mike Haywood was hired at Pittsburgh. Guidry oversaw a RedHawks 35-21 victory over Middle Tennessee in the 2011 GoDaddy.com Bowl. Meanwhile, Dan Enos will make his first bowl appearance at CMU.