The 2013-14 college football bowl season continues on Thursday, as the Little Caesars Bowl takes place between Pittsburgh and Bowling Green in Detroit.

Here are some things to keep an eye on when you're tuned into the contest between the Panthers and the Falcons.

The Panthers lost four of their last six games of the regular season, but they do have a win over Notre Dame on their 2013 resume. Paul Chryst was able to take Pitt bowling for the second time in as many seasons, and the program is looking to finish a season with a winning record for the first time since 2010. The Panthers' last two seasons ended with bowl losses and 6-7 marks. In its six losses this year, Pitt has been outscored by an average margin of 16.2 points, though that average is skewed by its season-opening 28-point loss to Florida State.

Meanwhile, the Falcons are looking to match a school record with their 11th win. However, they will be doing so without Dave Clawson, who left to take over the Wake Forest program. Adam Scheier will be the interim head coach before turning things over to Dino Babers. Will the Falcons turn in a focused effort as they did in the MAC title game win over Northern Illinois, or will we see a team that more resembles the outfit that lost to Indiana 42-10 in September? 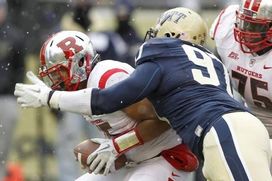 Pitt DT Aaron Donald was the ACC defensive player of the year.

The best player in the country?: Pitt defensive tackle Aaron Donald was not a finalist for the Heisman Trophy, but he very well may have been the best player in America this season. The 6-foot, 285-pounder was the ACC defensive player of the year as well as the winner of four major awards: Outland, Lombardi, Bednarik and Nagurski. He racked up an FBS-leading 26.5 tackles for loss and recorded 10 sacks, and he'll be going up against a Bowling Green offensive line that features first-team All-MAC selections Chief Kekuewa and Dominic Flewellyn.

Remaining crisp: The Bowling Green offense averages 35.4 points and 472.5 yards per game, led by redshirt sophomore Matt Johnson, who threw for 393 yards and a MAC title-game record five touchdowns in the Falcons' 47-27 win over Northern Illinois to ruin the Huskies' BCS hopes. He will look to have another strong game at Ford Field against his home-state program — the same one that didn't offer him a scholarship when Todd Graham was the head coach. Johnson completed over 64 percent of his passes for 3,195 yards and 23 touchdowns with just seven interceptions this fall. He is effective at escaping pressure and extending plays, and he has a strong complementary run game as well. Sophomore Travis Greene has rushed for a single-season school-record 1,555 yards and 11 scores this year.

Odds and ends: Bowling Green is favored by 4.5 points ... Pittsburgh leads the all-time series 2-1 ... Bowling Green won its first MAC title since 1992 ... Behind quarterback Tom Savage, the Panthers average 236.8 yards per game through the air, but they only run for an average of 114.9 yards per game, which ranks No. 112 in the FBS this season. And Savage has been sacked an FBS-high 41 times ... The Falcons' defense finished the regular season ranked fifth in the nation in points allowed, giving up an average of just 14.8 points per game ... The Panthers are making their sixth straight bowl appearance, but they're coming off of back-to-back losses in the BBVA Compass Bowl (28-6 to SMU in 2011 and 38-17 to Ole Miss last year).