Will some athletic directors pull the plug early on head coaches struggling to revive programs or live up to high expectations? 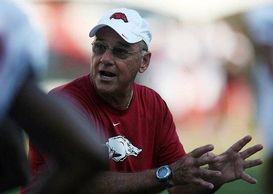 Can John L. Smith survive this season after the Hogs' disastrous start?

Arkansas head coach John L. Smith may occupy the hottest coaching seat in America after just three weeks following his team's disastrous showing at home against top-ranked Alabama. While Smith is on a one-year deal in Fayetteville, can athletic director Jeff Long endure what looks to be a very trying season in the rugged SEC? Immediately after the Hogs' 52-0 loss to the Crimson Tide on Saturday, rumors were swirling that Smith may not even make it to Week 4.

The environment is toxic in Fayetteville, as the Razorbacks have dropped back-to-back ugly games following their opening win over Jacksonville State. They fell to Louisiana-Monroe in overtime at home after blowing a huge lead last week, and then quarterback Tyler Wilson -- who missed the contest against 'Bama -- told reporters after the game that he believed his teammates quit at times in the loss. That's never something a head coach wants to hear from his star player. Can Smith survive the embarassment that has become the 2012 season?

Meanwhile, in Colorado, Buffaloes head coach Jon Embree is seemingly in over his head as his team sits at 0-3. He lost the opener against in-state rival Colorado State, which is being led by a first-year head coach. Then last week the Buffaloes fell to FCS school Sacramento State. But Saturday's contest was the ugliest one of them all.

The Buffaloes were manhandled 69-14 at Fresno State, a damning loss that should not occur in a second year of a rebuild. Will Embree, who is 3-12 in one-plus season, get the Turner Gill treatment? Gill was let go at Kansas after just two seasons.

And Kentucky's Joker Phillips, who is 12-16 as UK head coach, has work to do in Lexington if he wants to get a fourth season to lead the Wildcats. After losing the opener to in-state rival Louisville 32-14, the 'Cats beat Kent State only to fall Saturday to Willie Taggart's upstart Western Kentucky squad in overtime 32-31. The Bobby Petrino rumors will unquestionably reach epic heights this week in Lexington.