Louisville remained unbeaten Friday night with a 34-31 win in overtime over Cincinnati, claiming the Keg of Nails for the first time since 2007. 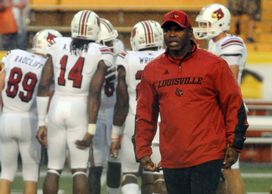 US PRESSWIRECharlie Strong has Louisville undefeated this fall.

Munchie Legaux was unable to back up his brash talk about being better than counterpart Teddy Bridgewater, as the Bearcats quarterback tossed three interceptions in the loss. Bridgewater, meanwhile, shrugged off a sluggish start and went 24 of 41 passing for a career-high 416 yards with two touchdowns and one interception.

The question for many Cardinal fans now is whether Charlie Strong's team can remain unbeaten up until its showdown with Rutgers on November 29. If that is for the Big East title, the winner could gain a date in the Orange Bowl against a team such as Florida State.

But what if the Cards run the table and finish the season 12-0?

The 'Ville currently sits at 8-0, and the team's next three contests are a home game against Temple, a road tilt against Syracuse and a home matchup with UConn. If teams such as Notre Dame, Kansas State and Oregon suffer a loss, is a national championship game berth possible?

It wouldn't seem likely just because I don't think a lot of voters in the Coaches' Poll or Harris Poll would place Louisville high enough, and the computers may not love the Cards either. But one thing is certain: Strong will be one of the most sought-after coaches on the market this coming offseason.

And Arkansas athletic director Jeff Long almost certainly will place a telephone call to the 52-year-old Strong, who is in his third year with the Cardinals.

The Cardinals head coach is an Arkansas native, played at Central Arkansas and has SEC coaching experience after stops at Ole Miss, South Carolina and Florida. He would be the perfect tonic for the Razorbacks' woes. But would Strong be interested? That is the question. But he seemingly would have to strongly consider entering a league that will actually have a firm place in college football's new postseason in 2014, unlike the Big East as of now.

The Hogs need a new coach for 2013, and Strong's stock will never be higher. We'll see how it plays out over the next few months.