But at this point, it's clear that the LSU Tigers are the most impressive team in the country.

In a hostile environment, LSU took care of business against Mississippi State 19-6 with its patented powerful running game, solid play from quarterback Jarrett Lee and its typical suffocating defense. 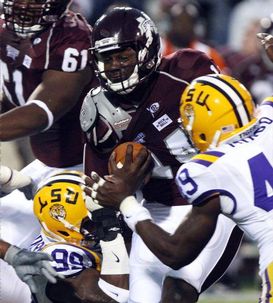 John Chavis' unit recorded fifteen tackles for loss, five sacks and two interceptions against a Mississippi State offense that has grown into a feared unit under third-year head coach Dan Mullen. The rushing attack, which has been the Bulldogs' bread and butter this season at 321 rushing yards per game, was held to just 52 yards. Fifty-two.

In all, MSU netted just 193 total yards and two field goals on the evening, with star running back Vick Ballard managing just 38 yards on 10 carries and bruising quarterback Chris Relf limited to a meager 10 yards on 16 carries.

No matter how much talent that Tigers line loses every year, it's always immediately replenished. Ends Kendrick Adams, Sam Montgomery and Barkevious Mingo, and tackles Bennie Logan, Michael Brockers and Anthony Johnson are kept fresh -- and effective -- because of the depth of that unit.

The scary thing about LSU is the fact that it's getting solid play from the senior Lee, who completed 21 of 27 passes for 213 yards against the Bulldogs with a perfectly thrown touchdown to Rueben Randle on a fade route from 19 yards out. Overall, the passing plays may have been conservative, but the touchdown to Randle was huge as it iced the victory for the Tigers.

And it made Lee's interception late in the game, which was his first in 132 pass attempts, mean very little.

With Lee playing the role of game manager, much like former Alabama quarterback Greg McElroy, the sky is the limit for Les Miles' squad. Spencer Ware again had a strong game, rushing for 107 yards on 22 carries, and the defensive line made a living in the MSU backfield.

If there was one aspect of their game that the Tigers need to clean up, it's red zone efficiency. Settling for field goals is never the route of choice, especially in the tough SEC. But with that defense, is more than one touchdown even necessary?

It will be, of course. And LSU has a stiff test next weekend at West Virginia and to close the regular season out against rival Arkansas, which boasts the best set of receivers in the nation.

Oh, and then there's the big one: Nov. 5 at Alabama. The team that resembles LSU in its dominant brand of football, especially on defense. The SEC West standard.

But, for now, the Tigers are warning the rest of the nation that they are already primed for a title run.

And not many teams can say that at this point.