LSU punches its ticket to Atlanta

By halftime, normalcy returned for the top-ranked team in the nation.

LSU used special teams and offensive balance to score 21 unanswered points to take a seven-point halftime lead over Arkansas, and the Tigers physically dominated the Razorbacks in the second half to claim a commanding 41-17 victory on Friday afternoon in Baton Rouge. With the win, LSU became champions of the SEC West.

The Tigers fell behind 14-0 early in the second quarter when Razorbacks quarterback Tyler Wilson hit Jarius Wright for a 13-yard touchdown and Alonzo Highsmith Jr. returned a Michael Ford fumble 47 yards for a score.

But the momentum quickly turned in Death Valley. 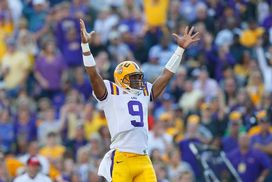 ICONJordan Jefferson overcame a slow start to lead a commanding victory over Arkansas.

While Tyrann Mathieu's 92-yard punt return for a touchdown raised the spirits of the sellout crowd, his forced fumble of Razorbacks running back Dennis Johnson may have made the biggest difference.

The Hogs were driving late in the second quarter when Johnson coughed it up after Mathieu's hit. LSU took over on its own 34 with less than two minutes to play in the half and drove 66 yards in five plays, a drive capped by quarterback Jordan Jefferson's 9-yard touchdown pass to Russell Shepard. That gave the Tigers a lead they wouldn't relinquish. Mathieu started at safety in place of the injured Eric Reid

All three of LSU's first-half touchdowns occurred in the final five minutes of the second quarter.

LSU was driving again to start the second half, but Jefferson threw his first interception of the season to Razorbacks defender Tramain Thomas deep in enemy territory. But after a 60-yard pass and catch from Wilson to receiver Cobi Hamilton, the Tigers held the Hogs to a field goal.

That's when the combination of LSU's ground game and overall dominant defense became too much for the Razorbacks.

On LSU's drive following the Razorbacks' three points, Ford broke off a huge rush of 49 yards to help set up a 21-yard field goal. After the Tigers forced the Hogs to punt, LSU went on a methodical drive, employing its exceptionally deep backfield of Ford, Spencer Ware and Kenny Hilliard. And the drive was capped off by Ware, who plowed his way in from seven yards out to put the Tigers up 31-17 with 11:04 remaining.

With the Razorbacks abandoning the run -- the one aspect of their offense that had had success against the Tigers the last few seasons -- the LSU defense made things look easy.

On the ensuing drive, cornerback Morris Claiborne intercepted his fifth pass of the season. The Tigers took over at midfield, and Jefferson went untouched 48 yards for a touchdown after faking a handoff to Ford, giving LSU a commanding 38-17 lead with 10:09 left.

A 37-yd field goal with 5:08 remaining meant that LSU had outscored Arkansas 41-3 since it trailed 14-0. That field goal also apparently didn't make Arkansas head coach Bobby Petrino too happy, likely believing the Tigers were running up the score. But as we know, when it comes to the pollsters, style points matter.

Mathieu forced yet another fumble for good measure, and LSU would go on to complete its first 12-0 (8-0 in the SEC) regular season in school history.

Up next? Georgia -- the only team in the SEC that owns a winning record against Les Miles -- in the SEC championship game in Atlanta.