Luck to return to Stanford in 2011

For the Carolina Panthers, it's back to the drawing board.

And if you just heard a big sigh of relief, that was likely coming from the direction of Jimmy Clausen. 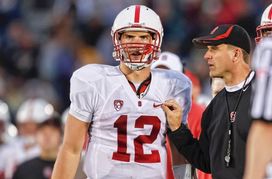 ICONStanford fans hope to see these two faces on the sideline in 2011.

Stanford University announced today Andrew Luck, a redshirt sophomore quarterback from Houston, Texas, will not declare for early entry to the 2011 NFL draft as required for underclassmen.

"I am committed to earning my degree in architectural design from Stanford University and am on track to accomplish this at the completion of the spring quarter of 2012", said Luck.

So what does this mean for head coach Jim Harbaugh? Anything? Something at all? We shall see...

What we do know is that Carolina, which owns the No. 1 pick in April's draft and indicated earlier this week that it would be interested in drafting Luck if he decided to leave school, will have to go in another direction.

Luck led Stanford to a 12-1 finish this season and he was a Heisman Trophy finalist. He passed for 3,338 yards with 32 touchdowns, completing 71 percent of his passes with just eight interceptions. He also rushed for 513 yards. Against Virginia Tech in the Orange Bowl on Monday night, he passed for 287 yards and four touchdowns in a 40-12 win.