Lunt continues to weigh his options

While Penn State quarterback transfer Steven Bench decided Thursday to continue his career at South Florida, the race to land Wes Lunt has not yet reached its conclusion, as the former Oklahoma State signal-caller is still weighing his options after Cowboys head coach Mike Gundy blocked him from transferring to any school in the Big 12, SEC and Pac-12 as well as Southern Mississippi and Central Michigan. 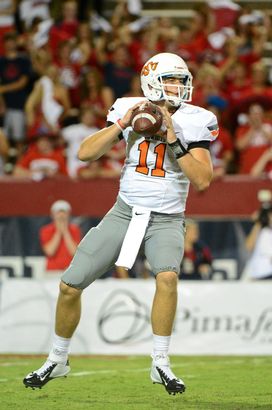 US PRESSWIREWes Lunt could decide between Illinois and Louisville if he doesn't appeal any schools on Mike Gundy's block list.

After recently taking an unofficial visit to Illinois that went well, Lunt is scheduled to visit Louisville, according to ESPN's Joe Schad.

And with Schad noting that Notre Dame is an unlikely destination at this point, it appears that Lunt's decision will come down to the Fighting Illini and the Cardinals.

That is, of course, if Lunt does not elect to file an appeal of Gundy's restrictions, which the family is still considering at this point.

If Lunt decides to leave the Pokes quietly and choose Illinois, it would be a great "get" for embattled Illini head coach Tim Beckman, who struggled mightily in his first season in Champaign. The campus isn't too far from Lunt's home, he grew up an Illini fan, his high school coach has a good relationship with Beckman and the spread scheme that the Illini and new offensive coordinator Bill Cubit are set to run fits the QB's strengths.

However, there's no question that Illinois isn't the most stable program in the country. Although Lunt could easily start next year with Nathan Scheelhaase moving on, there were whispers after Beckman's first season that he was already on thin ice at Illinois. Another rough season in Champaign, and a coaching staff turnover is not out of the question. Would Lunt want to sit out a year only to be welcomed by a new staff?

Meanwhile, Louisville's situation is incredibly stable. While Charlie Strong remains one of the hottest head-coaching names in the business, he turned down Tennessee's offer and is in a much better situation with the Cardinals leaving the old Big East and entering the stronger ACC. And with Heisman Trophy contender Teddy Bridgewater likely to leave after this season, Lunt could step in right away and lead a program that has been trending upward under the former Florida defensive coordinator.

We'll see if Lunt decides to appeal any schools on Gundy's block list. But if he doesn't, Louisville could be primed to have its quarterback situation set for the immediate and long-term future.