We are now fully immersed in bowl season, and the contest between Boise State and Utah is one of the more intriguing matchups on the entire schedule. While both teams certainly envisioned greener postseason pastures, expect both Chris Petersen and Kyle Whittingham to have their teams ready to play when the football is teed up for the opening kick of the MAACO Bowl Las Vegas on Wednesday night.

Here’s a closer look at the Broncos and Utes.

Boise State (11-1, 7-1 WAC): There’s been a lot of speculation that Boise State is due for a letdown after missing out on a likely opportunity to play Wisconsin in the Rose Bowl. A couple of missed field goals against Nevada late in the season thwarted the Broncos’ BCS plans. With a calming influence in Petersen and a Heisman Trophy finalist under center, though, expect the Broncos to play as well as they have all season. Disappointment doesn’t always have to run an entire season completely off course.

Kellen Moore, the junior signal caller who has thrown just eight interceptions combined in the past two seasons, ranks second nationally in pass efficiency rating (185.0), third in completion percentage (71), fourth in touchdown passes (33) and eighth in passing yards (3,506) this season. He directs an offensive attack that features receivers Titus Young and Austin Pettis, who combined for nearly 2,000 receiving yards and 18 touchdowns, and running back Doug Martin, who recorded 1,113 yards and 11 scores on the ground.

Moore’s chemistry with Young on the deep ball is almost uncanny. Of the nine times Young has reached the end zone this year, seven of the scoring grabs have been for 40 yards or more. We saw what TCU was able to do to Utah this season. Despite playing a bowl game in December, Boise is on par with the Horned Frogs — so expect Young to make his presence felt.

Utah (10-2, 7-1 MWC): The Utes will be without starting quarterback Jordan Wynn, who is out because of a shoulder injury. Senior Terrance Cain will get the nod under center. Cain, who started two games this season when Wynn had a sprained thumb, is 9-1 as a starter and fully capable of leading this Utes offense. After all, he was the starter last season before losing his job to Wynn midway through the eighth game of the season. He is actually more mobile than Wynn, which could be a big factor against an underrated Boise pass rush.

In the last two games, the Broncos have not had success stopping the run, giving up more than 200 yards on the ground to Nevada and Utah State. Being without middle linebacker Byron Hout, who has a broken foot, certainly has been a major factor. He will miss this game, so it will be interesting to see if the Utes dial up more runs and rollouts with Cain to take advantage of Hout’s absence.

Cain was solid in his two starts in 2010, but the last time we saw him on the field he looked overwhelmed against BYU. He came off the bench to relieve a struggling Wynn but then threw two interceptions before being benched himself. Which senior signal caller will show up Wednesday night? 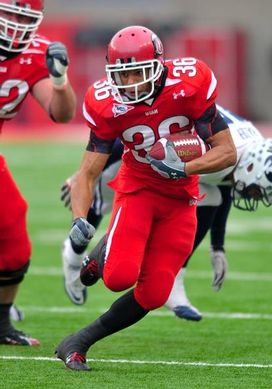 Can the Utes snag the win and build some momentum as it heads to the Pac-12 next season? It will be difficult, as the Mountain West-bound Bulldogs just have too much talent on both sides of the ball. The Utes own a nine-game winning streak in bowl games — the longest active streak in the nation. But they don’t have the dynamic rushing attack that Nevada has with quarterback Colin Kaepernick, who was able to give Boise problems. Eddie Wide and Matt Asiata certainly pace a solid rushing attack, combining for 1,356 yards and 19 touchdowns, but the Broncos will be too disciplined up front with Billy Winn, Shea McClellin, Ryan Winterswyk and Chase Baker — the front four who combined for 19.5 sacks and caused constant disruption throughout the year.

For Boise State kicker Kyle Brotzman, it has been a nightmarish conclusion to his college career. We know about the two missed kicks against Nevada that cost the Broncos the game. But then he had another miss against Utah State, the first time in his career he has missed three consecutive field goals. It may shock college football fans, but Brotzman is actually three points away from becoming the NCAA’s all-time leader in points by a kicker.

How great would it be if the game came down to a Brotzman field goal, and he calmly put it through the uprights?