Let's take a look at some of the most important aspects of this matchup between the Broncos and the Huskies.

• The Justin Wilcox factor: While Boise State has a solid offense, it is not as explosive as in years past with Kellen Moore and Doug Martin now in the NFL. So Washington defensive coordinator Justin Wilcox will not be facing a Broncos team that was able to easily win the last two MAACO Las Vegas Bowls against Utah and Arizona State by a combined 55 points. While the Huskies defense still has room to grow, the unit might have the edge against the Broncos offense. Wilcox coached under Broncos head coach Chris Petersen, and that's just one of the reasons why he is a rising head-coaching candidate. He has worked wonders at Boise State, Tennessee and now Washington. The Huskies need to be able to put their fourth-quarter collapse at Washington State behind them, though. If they have, I think it could be a big day for Wilcox's defense. 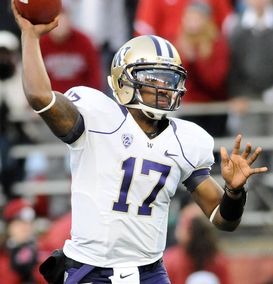 US PRESSWIREKeith Price has struggled with turnovers in many of Washington's losses.

• Is the Price right?: The Huskies have been an up and down team throughout 2012, but they managed to battle through numerous injuries and tough opponents to split their first six games. However, no one saw coming a 52-17 thrashing at the hands of Arizona on October 20. But Washington then reeled off four straight wins, and a lot of that had to do with the play of quarterback Keith Price. Price struggled with turnovers in many of the team's losses, but in that four-game stretch he tossed eight touchdowns and just two interceptions. The Broncos, though, pose a threat for Price because they have relied on their defense this fall to post their seventh straight 10-win season, which is the longest active streak in the country. The Broncos rank in the top 10 in the FBS at 14.9 points and 304.7 yards allowed per game, led by Demarcus Lawrence, who has 9.5 sacks, and J.C. Percy, who has registered 101 tackles. Jamar Taylor and Mike Atkinson have also stepped up for a team that lost so much defensive talent to the NFL last April.

• A signature win for the Broncos?: It feels odd that a Boise State season has been devoid of a signature win considering the run of recent success the team has had under the Petersen regime. But Boise, which is playing in the postseason for the 11th consecutive campaign, began the year with a tight loss at Michigan State, and Petersen's squad suffered its second loss to San Diego State at home, which was just its second regular-season loss in 73 home games. The Broncos rank 80th in the nation in passing with Joe Southwick at quarterback, so the defense that surrendered just 14.9 points per game has been heavily relied upon. But as well as that unit has played, it will get tested by Price, running back Bishop Sankey and tight end Austin Seferian-Jenkins. Perhaps the Broncos defense can get aided by miscues, though. Besides turnovers being an issue, Washington has been hit with 106 penalties for 959 yards. Petersen's bunch generates the third-most turnovers (33) in the FBS, so turnover margin will be a key stat to watch.